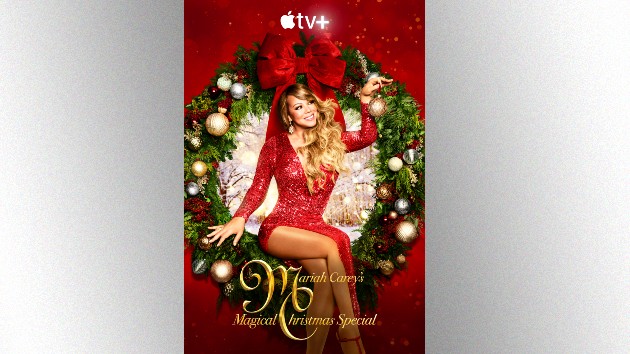 Ariana Grande just hopped on the “how it started, how it’s going” meme challenge by teasing her upcoming collaboration with Mariah Carey and Jennifer Hudson.

On Wednesday, the “positions” singer shared two photos to social media. The first was of a tweet she wrote in November 2011 that read, “@MariahCarey I love you. :],” while the second was a promotional photo of herself, Carey, and Hudson all singing into microphones with text that reads “Oh Santa!” above their heads.

Below them it reads “Mariah Carey featuring Ariana Grande & Jennifer Hudson” with the Apple TV+ logo.

Carey shared the same promotional pic to her own Instagram with the caption, “MC x AG x JH” followed by the microphone and Santa emojis.

While neither provided any audio sample of this new project, it appears that it will be a part of Mariah Carey’s Magical Christmas Special, an upcoming holiday celebration that centers on Mariah helping Santa Claus solve a crisis at the North Pole.

The special will premiere on Apple TV+ on December 4.

More about Ariana Grande’s wedding and her “tasteful” ring