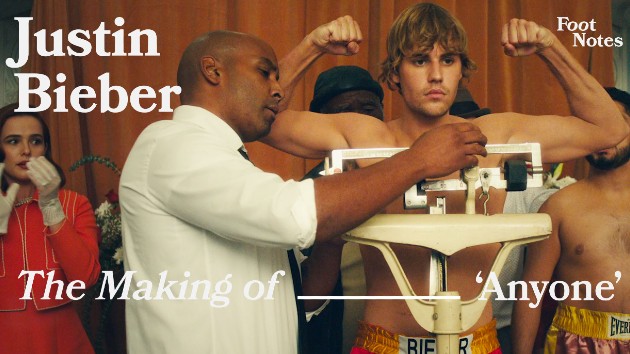 Justin Bieber was inspired by everything from The Notebook to boxing films like Creed and Rocky for his new “Anyone” music video.

This tidbit and more behind-the-scenes facts are divulged in the latest episode of Vevo Footnotes, “The Making of ‘Anyone."”

“I’ve always wanted to do a boxing video, and it made sense for this song being an 80’s power ballad,” Justin said, adding, “If you’re not in love, it makes you want to be in love. It’s kind of like The Notebook.”

Not only did Justin seek out movies for inspiration, he also heavily prepared for the video’s scenes in the boxing ring. Footnotes reveals that both Justin and director Colin Tilley wanted the character to be as real as possible, so Justin spent two days training with a fight coordinator.

He also spent three hours each morning getting all his tattoos covered up so he would look more accurate to the 1960s time period where the video is set.

As for the video’s love story between Justin and actress Zoey Deutch, the two didn’t actually meet until their first scene together, which involved them dancing on a beach. Deutch reveals she had to learn stick shift for the role, wore her own vintage clothing in the video, and improvised the final line, “I love you.”