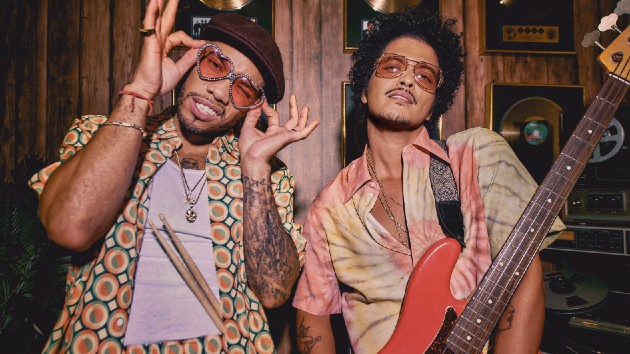 In what’s probably just a clever tease of the eventual announcement of his participation, Bruno Mars started a Twitter campaign asking The Grammys to book his new duo Silk Sonic on this weekend’s telecast.

On Sunday, Bruno tweeted, “Dear Grammys, If you can see it in your hearts to allow two out of work musicians to perform at your show, we would really appreciate it. We just released a song and could really use the promotion right now.”

Bruno added, “We just want to sing. We’ll send in an audition tape and take as many Covid tests as we need to. I promise we won’t be extra. We just really want a gig again.”

He also announced the hashtag #LetSilkSonicThrive, which started trending worldwide on Sunday. An excited Bruno tweeted, “Wow this started with just us 2 and now we’re a whole army! There’s nothing we can’t do. First the Grammys then the world! UNLIMITED POWERRR!“

But Bruno’s Silk Sonic partner, Anderson. Paak brought him down to earth, tweeting, “Bro the @RecordingAcad haven’t even responded,” and then joked that he needs to get a new gig, perhaps as the drummer for K-pop superstars BTS.

To which Bruno responded, “You’re right. I got excited we were trending for a while today. I’m sorry I let you down. I hope you & BTS go on to do great things.”

Of course, this is all likely a big joke: Bruno has won 11 Grammys and is a huge favorite of the Recording Academy. The TV debut of his new project would be a coup for the telecast, so we predict you can expect an announcement soon.

The Kid LAROI hits number one on ‘Billboard’ 200 chart