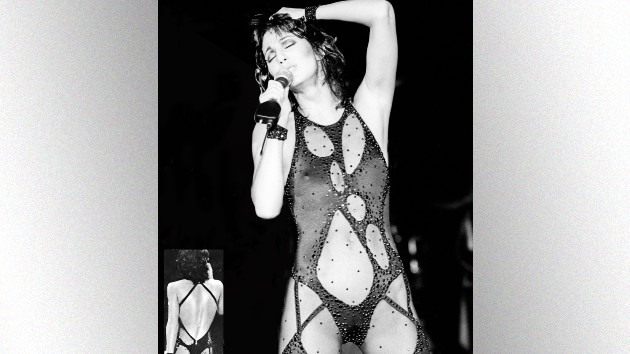 Did you ever get the urge to dance on the deck of an historic battleship, but you just didn’t have the outfit for it?  Well, you’re in luck: One of Cher‘s “If I Could Turn Back Time” outfits is going on the auction block.

Juliens Auctions is hosting a three-day Music Icons sale of memorabilia this June, and the outfit is among the items up for sale.  Designed by Bob Mackie, the jersey-and-fishnet bodysuit and matching motorcycle jacket is an ensemble that Cher wore onstage many times while singing her 1989 hit.  It was originally sold by Juliens Auctions for $60,000 back in 2006, and now that buyer is re-selling it.

Mind you, this isn’t the actual ensemble that Cher wore in the controversial “If I Could Turn Back Time” video — it isn’t quite so revealing — but it’s still pretty skimpy.  A gown the diva wore on The Sonny & Cher Comedy Hour is also up for sale, as is an Atelier Versace gown worn by Whitney Houston at a 1998 concert in Paris.

Other items in the auction include a floral print crepe dress Madonna wore in the 1996 film Evita, and a blue coat dress Lady Gaga wore when she performed with Elton John at Tower Records in L.A. in 2016.

The highlight of the auction, however, is a massive collection of clothing and memorabilia from Destiny’s Child: Over 100 lots of fabulous costumes from Beyonce, Kelly and Michelle, and even some of their recording equipment are up for grabs.  A portion of the proceeds from those items will go to MusiCares, the Recording Academy’s charity.

For details on how to register to bid and more, visit JuliensAuctions.com.

Black Eyed Peas doing livestream from the pyramids of Giza, Egypt next month

Dua Lipa levitates down the runway at Versace fashion show

Miss Independent: Kelly Clarkson will be a single woman again in January

BTS on the mental toll the pandemic’s taken on them: “I have been questioning my purpose in life”