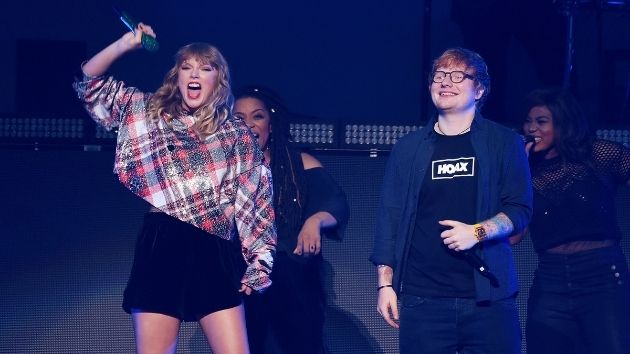 The duo released a remix of Sheeran’s “The Joker and The Queen,” which appeared on his fifth studio album = (Equals). Not only did they release the soft ballad, fans also were treated to the music video which will have longtime fans feeling a bit nostalgic as it continues the storyline from their first collaboration.

The English singer-songwriter first teamed up with Swift on “Everything Has Changed,” a track from her 2012 album Red, and the video featured two actors, who also happen to resemble the singers, as they fall in love while in grade school. 10 years later, the visuals for “The Joker and The Queen” reunite the actors as they continue the coming-of-age story as now 18-year-olds, Ava and Jack, as they now prepare to head off to college.

After the release, Sheeran shared a snippet of the music video to social media and wrote, “Me and Taylor first met and wrote + recorded our first song together in 2012, ten years ago now, I’m so so honoured to have her on this song.”

“Not only is she the best singer/songwriter in the world but she’s also a very close friend, I’m very lucky to have her in my life,” he raved. “For the music video we got the kids from our song Everything Has Changed, all grown up and off to college now ! Hope you love the song, and the video, and have a great week x.”

Swift shared Sheeran’s post on her Instagram Story and added, “This video makes me think of our friendship all these years. Also can’t believe Jack & Ava from Everything Has Changed video came back and did this!! Nostalgic heaven !”