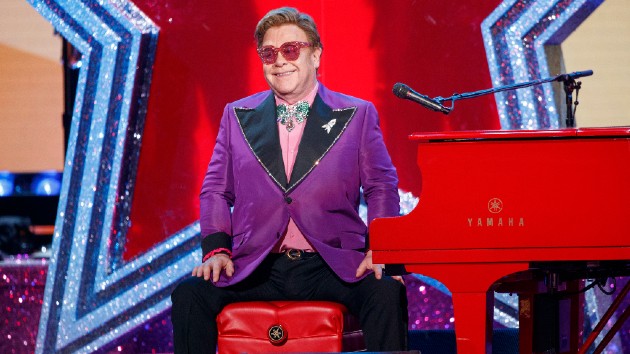 It looks as though Elton John may emerge from lockdown healthier than he’s been in years.

Appearing on the U.K. show Good Morning Britain, Elton’s husband David Furnish said it was a “big load off of my mind” when Elton, 73, got his COVID-19 vaccine.  But that’s not the only thing the music legend’s done to improve his well-being.

“He’s embarked on a fitness regime and a diet, he’s been losing weight, he’s been looking after himself really, really well,” David revealed, adding that he and Elton have “had the most amazing year doing stuff together, watching lots and lots of movies, lots and lots of television. Elton is continuing to just devour new music, he listens to everything new that comes out all the time.”

“We’ve been really busy, happy and fulfilled and also, more important than anything, spending more time together as a family and loving it,” David added, referring to the couple’s two sons, Zachary and Elijah.

Asked if the boys have experienced any bullying because they have two dads, David said no, and added that Zachary, 10, asked him at one point why scenes from Elton’s biopic were cut out in Russia.

“I said, ‘Some parts of the world they don’t believe it’s right for two men to be in a relationship and be in love,’” David told Good Morning Britain. “And his immediate response was, ‘Well, they’re wrong, aren’t they? They’re completely wrong.’”