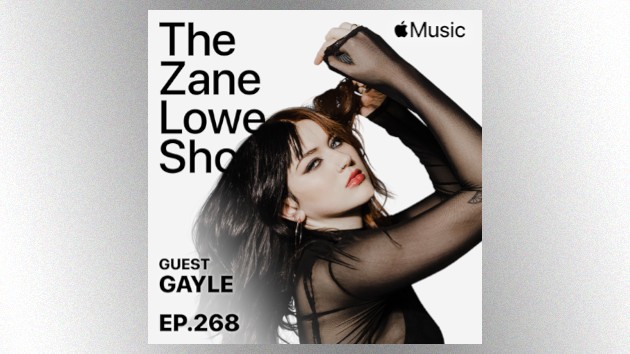 Ever since GAYLE broke out with her hit “abcdefu,” she’s been compared to Olivia Rodrigo, thanks to the brutal honesty of her lyrics and her love of the F-word.  Now, she’s revealed that while Olivia has definitely been an inspiration to her, Billie Eilish has been equally impactful, in terms of how to be “a bada**, powerful woman” in music.”

Asked by Zane Lowe of Apple Music 1 if she feels as though Olivia has given her and others artists like her a license — pun intended — to be unrestrained and truthful, GAYLE said, “Oh for sure. It’s so exciting to feel like you are able to be unfiltered, and with Olivia, I mean, it was so inspiring. But even before that, Billie too.”

“Even the way she handled herself and the way that she just represented herself wasn’t necessarily like your average 15 or 16-year-old girl,” added GAYLE, who’s 17, of Billie.  “And even the way she acted in interviews, she just was, like, completely herself, and the same with Olivia.”

“You don’t ever feel like people are telling them what to say, they’re saying what they want to do and control their creative direction,” she noted. “And that is just so exciting, and just to like be around powerful bada** women just feels amazing.”

And while “abcdefu” broke out on TikTok, Gayle admitted that she’s no whiz on social media.

“Honestly, TikTok and Instagram and social media was such a hard thing for me to try and figure out and feel comfortable doing because I was literally just doing music,” she explained. “So the fact that people can even think that I was just like this TikTok star, it’s honestly kind of a compliment because I struggled for so long with that app.”

Britney Spears shares cryptic video of her dancing: “This is a tease of what’s to come”