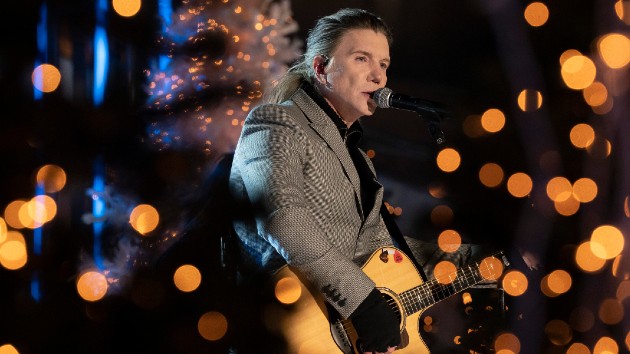 This year, Goo Goo Dolls released their first holiday album, Christmas All Over, which features a number of festive tunes.  But frontman John Rzeznik says Christmas has always made him melancholy, too — or at least it did, until he became a father.

Christmas has always been an emotional time for John because when he was still in high school, less than two months before Christmas, he was orphaned when his mother died suddenly.  His sister became his legal guardian, but at age 17, he moved into his own apartment and supported himself with his late parents’ Social Security checks.  As he tells ABC Audio, that first holiday was pretty rough.

He recalls his attempts to make things festive that year.

“My girlfriend at the time and I, we made the ornaments out of, like, flour and water…and then we painted them and put them on the tree,” he recalls. “And it was basically like trying to have some semblance of normalcy at a very abnormal time.”

“Which kind of made me reflect…that’s kind of what we’re going through now,” he says, referring to everybody’s struggles to have a happy holiday season amid the COVID-19 pandemic.

But now that John’s a dad to daughter Liliana, who just turned four on Tuesday, he feels that Christmas magic again.

“Ever since she’s been around, it’s…just reignited my love of Christmas,” he says. “Just watching her, it just renews the whole spirit of it.”