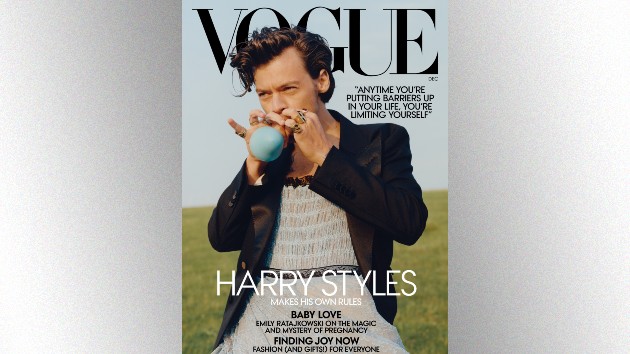 Harry Styles is rocking a gown on the cover of Vogue magazine, and one conservative commentator apparently thinks it’s a sign of the apocalypse.

Candace Owens tweeted Vogue’s photos of Harry and wrote, “There is no society that can survive without strong men. The East knows this. In the west, the steady feminization of our men at the same time that Marxism is being taught to our children is not a coincidence. It is an outright attack. Bring back manly men.”

The Good Place star Jameela Jamil tweeted, “Harry Styles is plenty manly, because manly is whatever you want it to be, not what some insecure, toxic, woman-hating, homophobic d**heads decided it was hundreds of years ago. He’s 104% perfect.”

She then tweeted a photo of an actor in a movie that takes place in the 1700s, dressed in the fashion of the day, and added, “This was at one time considered very manly. Wigs, make up, tights, frills… maybe this is the comeback of the ‘manly man."”

Meanwhile, fans flooded Twitter with criticism of Owens’ statement, accusing her of being jealous that Harry looks better in a dress than she does, taking her to task for focusing on Vogue when there are much more important issues in the world, or simply bashing her for thinking people shouldn’t be allowed to wear whatever they like.

Harry is, of course, far from the first male musician to wear a dress.  David Bowie wore one on an album cover back in 1970. Nirvana‘s Kurt Cobain also wore one in the ’90s.