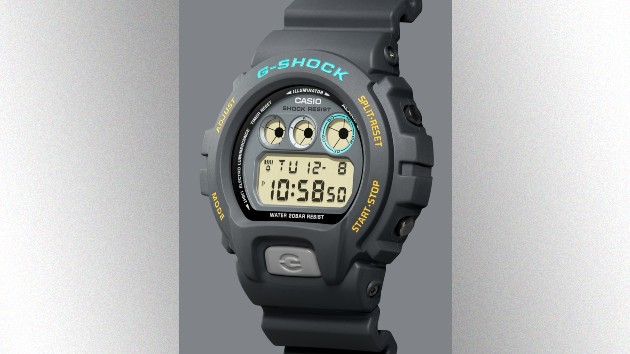 If you’re a John Mayer fan, you know that he’s an avid watch collector and regularly wears timepieces that cost tens of thousands of dollars.  He just personally designed a watch for fans with normal-sized bank accounts — but unfortunately, it just sold out, despite the fact that it was released only yesterday.

John teamed with Casio and the website Hodinkee to create the G-SHOCK Ref 6900 by John Mayer, which costs under $200.  The design of the limited-edition timepiece was inspired by the electronic sampling keyboard that John played as a kid back in the day: the Casiotone SK-5.  The watch is gray with blue and yellow detailing — the same color scheme as the keyboard.

“When Casio approached me about the possibility of working together on a G-SHOCK, it actually timed out really well,” John said in a statement. “[I]…felt something felt cosmically right about a G-SHOCK being the first watch collab I’ve ever done. Casio keyboards came to mind as much as the watches did.”

“Then I remembered how important the Casiotone SK-5 was in my life, and it got exciting really fast,” he adds. “It’s the perfect bridge between my double life as a musician and a watch enthusiast.”

On Instagram, John posted pics of the watch and wrote, “ They sold out faster than anyone expected (I promise), but I wanted to share these images with you, along with my thanks to @gshock_casio_official and @hodinkee for the chance to make the fun of watch collecting more accessible to people. Hope you dig it.”

No word on whether or not more of the watches will be created but hey, there’s always eBay.