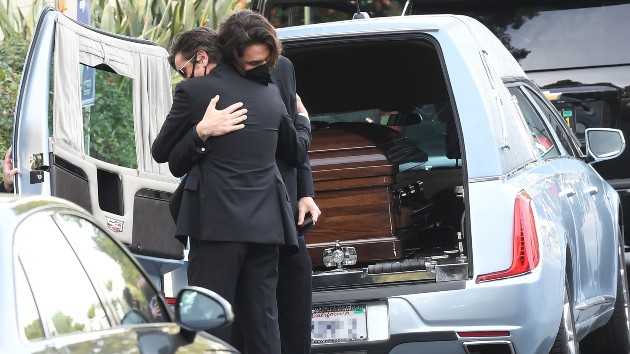 John Mayer was a close friend of beloved comedian and Full House star Bob Saget, and even served as a pallbearer at his funeral. Now, John has come up with a unique way to raise money for his late friend’s favorite charity.

On Instagram, John unveiled a navy hoodie that says “Bob Saget” on the front, against a decoration of blue roses, with the logo of the Scleroderma Research Foundation on the back.  Saget was a board member of the Foundation; his sister Gaye died of the disease at age 47.

“Bob Saget worked tirelessly to raise awareness and money for the Scleroderma Research Foundation, a cause that was so close to his heart,” John wrote in the caption. He noted that he collaborated with two designers to “help design this hoodie to keep both his memory and the enduring fight for a cure alive.”

The sweatshirts cost $55 and are available now via Represent.com/SRF.  They’ll be shipped starting February 10.

Saget’s widow, Kelly Rizzo, reposted the image and wrote, “Thank you @johnmayer for designing this and making this happen.”

Among the stars who praised the initiative in the comments were Saget’s close friend Jeff Ross, who wrote, “Awesomeness ! I’m buying a bunch of these,” and John’s close pal Andy Cohen, who wrote, “Purchased! What a great idea.”

Bob’s Full House co-star Candace Cameron Bure put heart emojis in the comments and reposted it on her Instagram.  She’s selling t-shirts, sweatshirts and hoodies that read “Love Like Jesus, Hug Like Bob Saget” — perhaps a little odd, since Saget was Jewish, but O.K. — with proceeds also going to the Scleroderma Research Foundation.