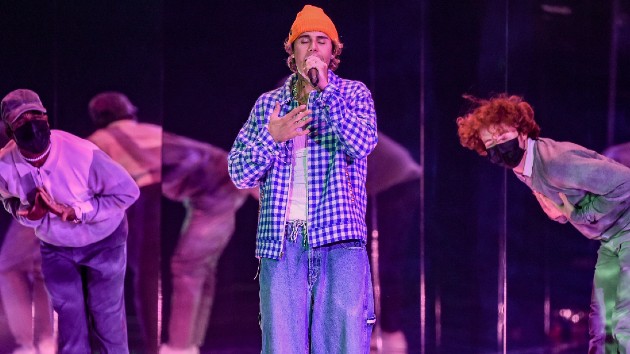 You’ve probably already heard that Taylor Swift’s wins at the American Music Awards last night extended her lead as the artist with the most awards in the show’s history: She’s got 32, eight more than Michael Jackson, who’s in second place.  But as Billboard notes, quite a few other artists also set records with their wins last night.

Taylor set a record of her own: She won Favorite Female Artist — Pop/Rock for the fifth time.  She’s now won the category more times than any other artist, passing Whitney Houston and Olivia Newton-John, who each won four times.

Justin Bieber won Favorite Male Artist — Pop/Rock for the fourth time, setting the record for the most wins in that category.  He passed Michael Bolton, Eric Clapton, Michael Jackson and Barry Manilow, who each won it three times.

Harry Styles‘ album Fine Line won Favorite Album — Pop Rock. He’s now the only artist who’s ever won this category both as a solo artist and as part of a group or duo: His group One Direction won the category twice in 2013 and 2014.

“The Bones” singer Maren Morris won Favorite Female Artist — Country Category. It was the first time in 14 years that someone other than Taylor Swift or Carrie Underwood won the award.

Finally, Lauren Daigle was named Favorite Artist — Contemporary Inspirational for the fourth year in a row.  She’s now tied with Casting Crowns for the most wins in the category.

Taylor Swift makes unknown Irish musician’s day by grooving to his set, asking him for a selfie