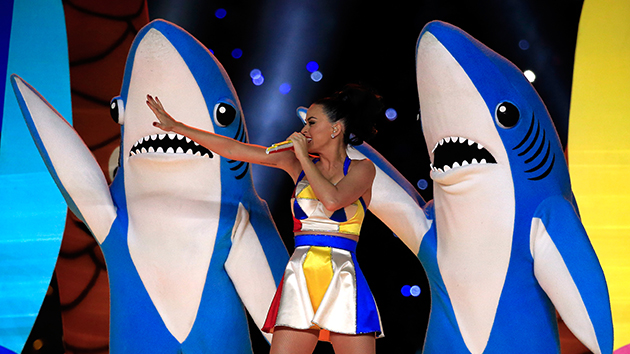 Katy Perry is proud to welcome The Weeknd into the Super Bowl halftime performers club.  Appearing on Jimmy Kimmel Live! on Monday, the “Smile” singer reflected on her own halftime performance from six years ago.

Perry revealed that she was on her feet dancing with her newborn daughter Daisy Dove as the “Blinding Lights” singer performed, saying that he “did a good job.”

She said she also picked up on The Weeknd’s wide-eyed stare at the start of his show, saying she “knew the feeling.”

Reflecting on her 2015 halftime show, the American Idol judge opened up about the amount of prep she poured into rehearsals — especially when it came to perfecting her dismount from the giant lion she rode into the stadium.  In order to get down from it, Perry revealed she had to run off camera and slide down a “fireman’s pole.”

“I ran the performance, you know, 75 times,” the Grammy nominee reflected before diving into the disaster she had at dress rehearsal, when she slid down the pole in her rubber beach balloon outfit.

“It was made of latex. And… when I went down on the fireman’s pole, it split in half,” she laughed. “I was like, ‘Oh, this is why we do rehearsals with costumes! Got it."”

Perry also revealed the meaning behind her daughter’s name during the interview, telling host Jimmy Kimmel, “Daisy to me means… purity and dove means peace and Bloom kind of feels like it means joy. So pure, peace and joy.”

She also shouted out Taylor Swift‘s “very thoughtful” gift, a handmade baby blanket that had Daisy’s name embroidered into the pink fabric.

“There’s, like a little inscription and everything,” Perry smiled. “She’s very sweet!”

Anne-Marie on biggest lesson Ed Sheeran taught her: “I learned not to be scared, but to be seen”