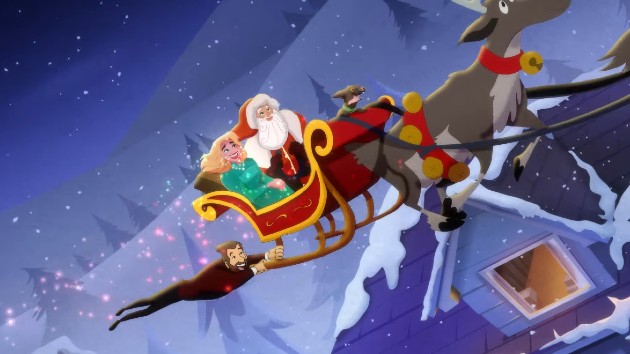 Kelly and Brett’s adorable animated video for “Under the Mistletoe” features cartoon versions of both singers — as well as Brett’s dog Edgar — in a cute tale of family mayhem during the holidays.

Specifically, Edgar causes all kinds of trouble, from stealing the turkey, to wrecking the Christmas tree, to jumping onto Santa’s sleigh at the last minute.  Both kids and the parents also enjoy romantic moments, and there’s a funny subplot about Grandpa getting stuck in the bathroom.

Kelly and Brett will perform the song Friday on NBC’s The Tonight Show Starring Jimmy Fallon and next Wednesday, December 16 on The Kelly Clarkson Show.

Goo Goo Dolls, meanwhile, have released a video for their version of “Let It Snow.” It shows group members John Rzeznik and Robby Takac lounging around a living room, decorating a tree, exchanging gifts and toasting each other with martinis as the snow falls outside.

Report: Kelly Clarkson “will not even entertain the idea of settling” in ongoing divorce case

Kelly Clarkson is officially a step-grandmother