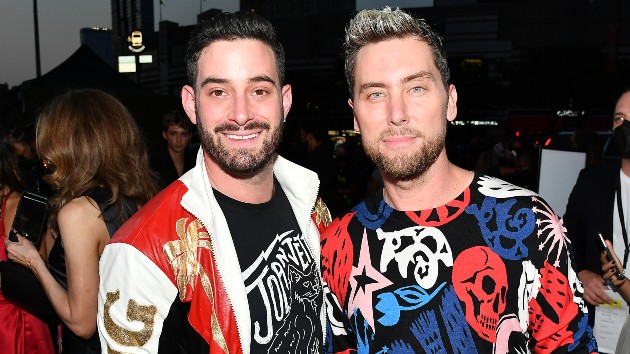 Lance Bass’ newborn twins made their Instagram debut on Sunday night, and it seems as though fatherhood so far has been both exhausting and messy — in other words, normal — for the *NSYNC singer.

Lance posed with the babies — Violet Betty and Alexander James — who were both swaddled in blankets and caps, lying on a pillow.  “Haven’t slept much in 5 days and I’m covered in ick but I’ve never been so happy!” he captioned the pic. “Now there are four of us in this house that wear diapers (hint: it’s not me or @michaelturchinart).”

Another picture in the slideshow indicates that it’s Lance and husband Michael Turchin‘s dogs who are wearing diapers — there’s a pic of Michael cradling one of the babies while a small dog wearing a diaper can be seen next to him on the sofa.

In his post, Lance also wished his *NSYNC bandmate Chris Kirkpatrick — who he called “Uncle Chris” — a happy birthday.  He added “Go Pack Go!” and included a picture of both infants dressed up in Green Bay Packers’ gear.

Interestingly, in the photo, Lance is wearing a Breathe Heavy t-shirt. Breathe Heavy is a very well-known Britney Spears fan site that has been very supportive of the #FreeBritney movement, so it’s possible that Lance was subtly showing his support for his old friend.

Not a girl, most *definitely* a woman: Happy 40th birthday, Britney Spears!

Britney Spears reveals she’s finally on the right medication: “It’s good to BE HERE and be PRESENT !!!!”