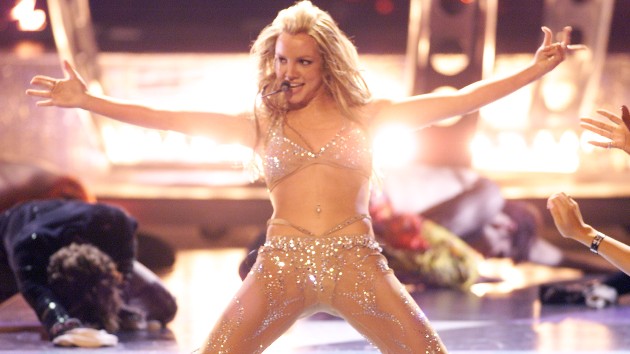 As if she didn’t already have enough to celebrate, Britney Spears turns the big 4-0 today, December 2. Within the past few weeks, Britney’s 13-year-long conservatorship was finally ended, and it appears that wedding plans with fiance Sam Asghari are proceeding quickly.  The mom of two is even thinking about having another baby.

A few days ago, Britney teased on Instagram, “Guess what???? My b-day is coming soon!!!!”  And while we don’t know how she’s planning to spend her special day, let’s celebrate her by highlighting just a few of her many accomplishments.

–Britney’s scored five number-one singles and six number-one albums. Her second album, Oops!…I Did It Again, set the record for the highest debut-week sales by a female artist, with 1.39 million. That record stood until Adele‘s 25 broke it in 2015.

–Britney’s line of signature perfumes, now numbering more than 20, has made over $1.5 billion.

–Among the TV shows Britney has appeared in over the years: Will & Grace, Glee, How I Met Your Mother, The Simpsons, Sabrina the Teenage Witch and Jane the Virgin.  She was also a judge on The X Factor’s second season.

Asked to send Britney a birthday wish, her old pal Joey Fatone from *NSYNC tells ABC Audio, “To Britney: Happy 40th birthday! Have fun, enjoy, be safe. You need to party your a** off!”

“Not too crazy,” he adds. “But party your a** off in the sense of, to have your freedom, to have fun, to be able to enjoy yourself and do what the hell you wanna do…obviously, within reason! So Britney, happy 40th birthday and enjoy!”

–Britney is a doting mother to her teenage sons Sean Preston and Jayden James, and wrote this year, “I’m so incredibly blessed to have these two little men in my life.”

As “abcdefu” turns 1, GAYLE looks back: “I would not have expected it to be this song”

BTS’ J-Hope talks solo career: “This experience has given me a positive influence overall”

As tour launches, Lauv plans to show fans the new him: “I feel like such a totally different person”