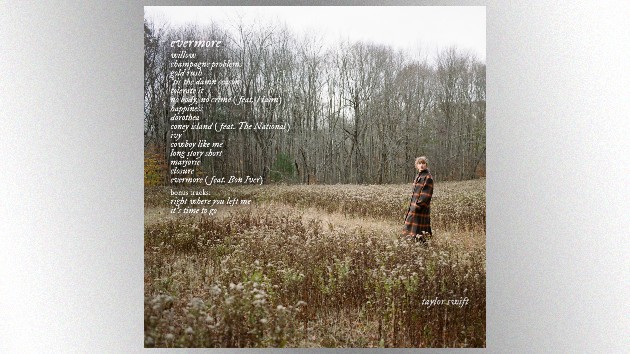 Remember two weeks ago, when Taylor Swift wrote on Instagram, “Not a lot going on at the moment,” and we all knew she was up to something?  Most thought it was her Disney+ film the long pond sessions — but it turns out she was also hinting at her surprise album, evermore, which is coming out tonight.

As Swifties have pointed out — and as Billboard has rounded up — Taylor actually dropped Easter eggs pointing to evermore, because that’s what she does.

As one fan noticed, in the “not a lot going on” picture, a photo of a willow tree can be seen on the wall behind her.  What’s more, in a December 4 tweet about Rolling Stone naming folklore one of the year’s best album, Taylor wrote, “*throws self to the base of a willow tree by a reflection pool at midnight.*  Well, wouldn’t you know: The first single from evermore is called “willow,” and the video is out at midnight.

On her Instagram story this week promoting her Entertainment Weekly interview, Taylor also hinted at evermore by captioning a photo of herself, “This outfit really screams ‘TIS THE DAMN SEASON.”  And, of course, “Tis the Damn Season” is the title of the fourth song on the new album.

Next, Taylor responded to an article in the Los Angeles Times with a tweet Wednesday that included nine tree emojis — and evermore is her ninth studio album.

Finally, she wore her hair in a French braid while accepting her AMA award — the same hairstyle she wears on the cover of evermore — and turned around so everyone saw it.