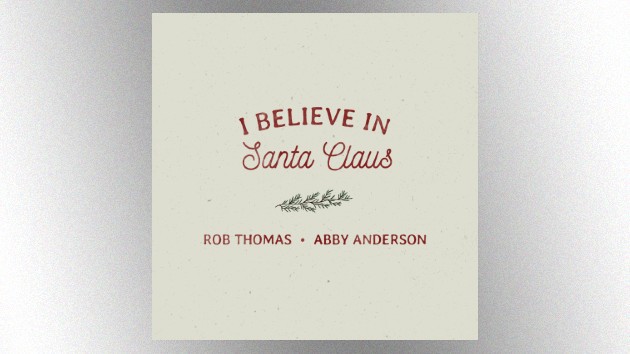 Rob Thomas hasn’t released a holiday song since 2003’s “A New York Christmas,” but this year, he’s giving fans a gift of a new festive track.

Rob’s teamed up with country singer/songwriter Abby Anderson — who opened for him on his 2019 Chip Tooth Smile tour — to record “I Believe in Santa Claus.”  The song, written by Dolly Parton, originally appeared on Once Upon a Christmas, the 1984 holiday album Dolly made with her great friend, the late Kenny Rogers.

In a statement, Rob said, “Kenny And Dolly’s Christmas album has always been a favorite of mine every year. When it came on this year I immediately thought of Abby because she has a quality about her and her voice that reminds me of Dolly.”

In fact, Abby says Rob texted her on Thanksgiving Day and suggested they record the track.

“What amazes me is the way she interpreted the song and made it sad and hopeful at the same time,” Rob continues. “It felt like it was tailor made for the time we are in and really highlighted how great the lyrics are in what always sounded like a silly, fun song.”

On December 23 at 8 p.m. ET, Rob will do a benefit show for his and his wife Marisol‘s charity, Sidewalk Angels Foundation, which supports no-kill animal shelters and rescues.  You can buy tickets now at swa.nocapshows.com.