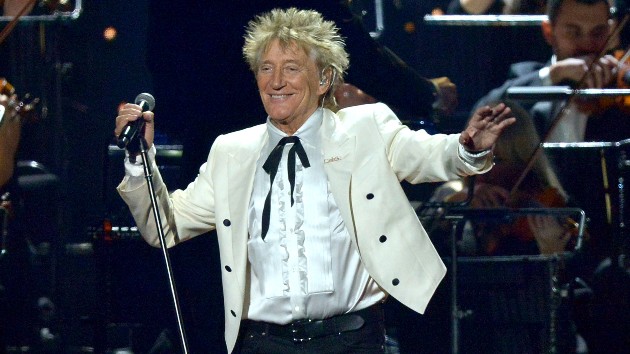 Seems like Rod Stewart has used his time in lockdown wisely: He’s been making new music.

Appearing on the British talk show Lorraine on Friday, Rod’s wife Penny Lancaster said Rod has “a whole new album that’ll be out soon, when he gets to tour, which he can’t wait to do.”

Meanwhile, though, Rod isn’t going anywhere: He popped into Penny’s Zoom with Lorraine and revealed that he’s hobbling around on crutches.  The Rock and Roll Hall of Famer had a knee replacement in January, and in November, he had to have ankle surgery.  Penny said recovery from the latter operation has “taken a little bit longer,” but added, “He will be back.”

Rod’s last album was the 2019’s You’re in My Heart: Rod Stewart with the Royal Philharmonic Orchestra.  The collection, which featured Rod’s classic recordings augmented with new orchestral arrangements, topped the chart in his native U.K. In the U.S., it hit number one on Billboard’s Classical Albums chart.

(Rod’s appearance & subsequent discussion of new album comes 4:09 into the video below)

Miss Independent: Kelly Clarkson will be a single woman again in January

Alessia Cara’s ready for ‘Global Citizen Live:’ “It’s important to do my part as a citizen of the world”