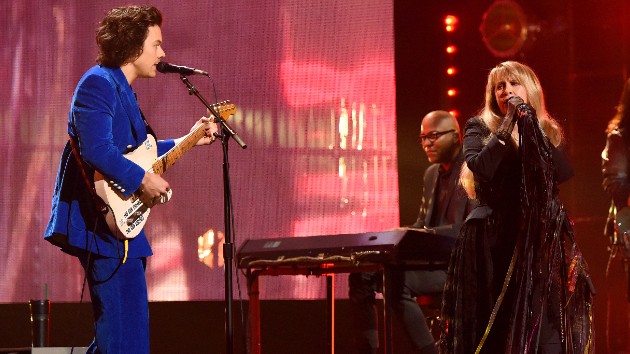 Stevie Nicks and Harry Styles are BFFs, but surprisingly, Stevie says Harry is the person who first made her realize just how serious the COVID-19 pandemic was — back in February.

Speaking to People magazine, Stevie says, “I was on the phone with him, probably in February, when the rumors were starting to really fly around about the pandemic. I said to Harry, ‘So H, what do you think? I think it’s going to be a long time before we get to step on that stage again.’ And he said, ‘I don’t think it will be until at least the end of 2021, and possibly not until 2022."”

While it remains to be seen whether or not Harry is right, Stevie’s taken no chances: She’s terrified of getting the coronavirus because she believes that if she’s put on a ventilator, she will “probably never sing again.”

“My niece just got married, and I couldn’t go to her wedding,” she says. “I can’t run over and hug my friends. My mantra every day is: I’m not getting [the coronavirus]; I can’t chance it.”

Instead, Stevie says she’s staying at home dancing around to Lady Gaga songs and bingeing shows like Law & Order and Chicago P.D.  Of course, she’s done a lot more than that: She’s released her live album and concert movie 24 Karat Gold Tour, she’s put out her new song “Show Them the Way,” and she just did a remix with Miley Cyrus called “Edge of Midnight.”

While all that was happening, her Fleetwood Mac classic “Dreams” became a hit all over again thanks to its popularity on TikTok.