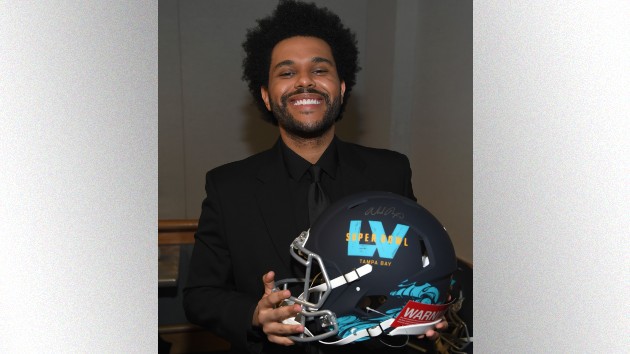 The Weeknd is already making history with Sunday’s Super Bowl performance — he’s the first Canadian to headline the halftime show solo — but he could also make some chart history in the weeks after the broadcast.

According to Billboard, despite all the hype and blockbuster ratings, no artist has actually hit number one on the Hot 100 as a result of their Super Bowl performance.  But The Weeknd is in the best position to accomplish this: His former number-one hit “Blinding Lights” is currently number three, while his latest single “Save Your Tears” is number 14.  Either one of them could jump up to the top after he sings them on Sunday.

Of course, the halftime show has impacted the chart in the past:  Lady Gaga‘s “Million Reasons” re-entered at number four after her 2017 show, while Madonna‘s “Give Me All Your Luvin"” and The Black Eyes Peas‘ “The Time” hit the top 10 after they performed.

Interestingly, the Super Bowl began in 1967, but it was only in 1991, with New Kids on the Block‘s performance, that halftime became an opportunity for stars to play their hits. Prior to that, it was mostly marching bands, old Hollywood stars or the vocal troupe Up with People.

The Weeknd’s been checking out some of the most iconic performances, starting with 1993, when Michael Jackson set the standard for the halftime show to be a massive pop spectacle.

Here’s a list of the stars who’ve played Super Bowl halftime since 1991:

Meghan Trainor celebrates the third anniversary of “No Excuses”