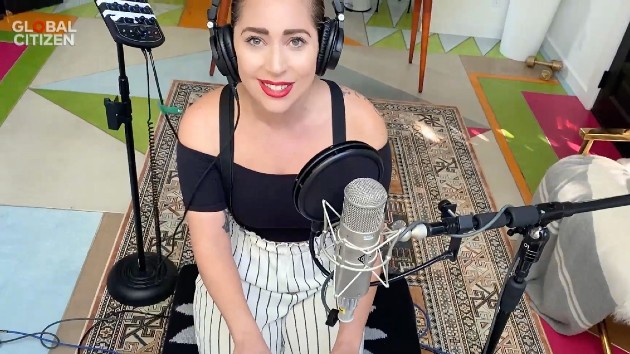 The COVID-19 pandemic affected all areas of life this year, but the music industry was among the most impacted: The global concert business lost an estimated $30 billion as live events were completely shut down.

Among the countless artists who had to cancel scheduled or ongoing tour dates were Harry Styles, Lady Gaga, Maroon 5, Celine Dion, Elton John, The Eagles, Backstreet Boys, Bon Jovi, Alicia Keys, Dua Lipa and Lewis Capaldi, while the Jonas Brothers and Kelly Clarkson had to put planned Las Vegas residencies on hold.  Every major festival was either canceled, or was held virtually.

Several artists delayed their album releases, believing it was distasteful to release music — especially upbeat music — during such a grim moment in history.  For example, not only did Sam Smith push their album release from June to October, they also changed the title from To Die for to Love Goes. Lady Gaga also pushed back the release of her album Chromatica from April to the end of May.

British pop star Dua Lipa took the opposite approach, banking on the fact that people needed joyous music to uplift and distract them. She released her disco-inspired album Future Nostalgia at the end of March and ended up with one of the biggest hits of the year.  Taylor Swift doubled down with not one, but two surprise albums, and dominated the charts.

And at the end of the year, we got a slew of Christmas albums and singles from artists — including Meghan Trainor, Goo Goo Dolls, the Jonas Brothers, Kelly Clarkson, Pentatonix, Josh Groban and Justin Bieber — who probably hadn’t planned to make them at the start of 2020 but who suddenly had time on their hands and realized people might want some feel-good nostalgia.

Mariah Carey went all out with an Apple TV+ Christmas special and a new version of her hit “Oh Santa,” with Jennifer Hudson and Ariana Grande.  Her song “All I Want for Christmas Is You,” meanwhile, reached number one yet again.

But without any in-person live events, music fans were glued to their computers and TVs watching virtual or “at-home” performances from their favorite artists. It’s safe to say that never before have so many fans gotten the opportunity to criticize millionaire pop stars’ taste in home decor.

Many of those performances were fundraisers for COVID-19 relief efforts, but the biggest one of all was One World: Together at Home, organized by Global Citizen and curated by Lady Gaga.  Artists featured on the show included Gaga herself, plus Celine Dion, Paul McCartney, Elton John, Shawn Mendes and Camila Cabello, Celine Dion, Taylor Swift, Jennifer Lopez, Sam Smith and Stevie Wonder.  The event raised nearly $128 million.

The election and the Black Lives Matter movement were also important to stars in 2020.  Many singers blacked out their Instagram accounts on June 2 to protest police brutality and racial injustice; others, such as Shawn and Camila, temporarily gave their accounts over to activists and heroes of the social justice movement.

Many stars took to the streets to protest, including Harry Styles, Pink, Joe Jonas and wife Sophie Turner, Ariana Grande, Jennifer Lopez, Shawn Mendes and Camila Cabello, and Madonna.  The Weeknd donated $500,000 to BLM-related causes, and posted the receipts online to prove it.  Jon Bon Jovi wrote and recorded “American Reckoning,” a song inspired by George Floyd‘s murder and his own white privilege.

As for the election, you’d be hard-pressed to find a singer in 2020 who didn’t at least recommend that their fans register to vote — either by mail or in person — and to vote early if they could.  Even non-American singers like Harry Styles and Justin Bieber begged fans to go to the polls, while always-game-for-a-funny-costume Katy Perry dressed up like an “I Voted” sticker and danced on a street corner.

Pink says she wouldn’t want to handle her daughter’s music career: “We would kill each other”