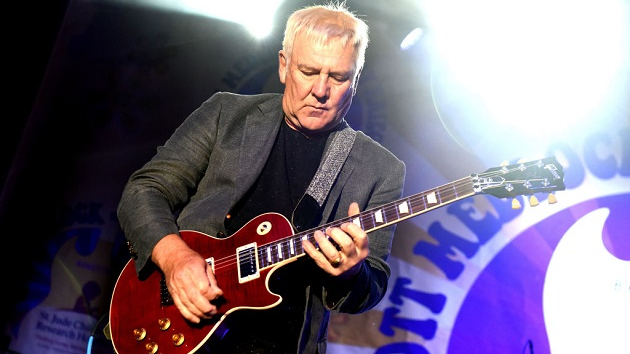 Fans can enter the giveaway by using a QR code that’s printed on a ticket located on the inside of one of the CDs from in the Deluxe Edition of Envy of None’s self-titled debut album, which is due out on April 8. In addition, fans outside of the U.K. can enter by simply sending their full name, postal address and email address to “EON Giveaway, Snapper Music, 52 Lisson Street, London, NW1” by July 11, 2022 — the contest’s closing date. Visit KScopeMusic.com/EONGiveaway for more details.

The Alex Lifeson Epiphone Les Paul Standard Axcess guitar, which was released in June 2021, was based on a similar model on which Lifeson collaborated with Gibson in 2015. The instrument features special modifications requested by Lifeson, including alterations to the pickups and a vibrato setup.

As for Envy of None, Lifeson is joined in the band by bassist Andy Curran of the veteran Canadian rock group Coney Hatch, guitarist/keyboardist Alfio Annibalini and singer-songwriter Maiah Wynne.

The album is an 11-track collection that offers up a wide sonic palette, with influences including alternative rock, synth rock and experimental rock mixed with melodic pop. It includes a song titled “Western Sunset,” which Alex wrote as a tribute to late Rush drummer Neil Peart.

Envy of None can be pre-ordered now, and will be issued in multiple formats, including digitally, on CD, on LP and as a deluxe limited-edition collection featuring a blue-vinyl LP, a two-CD set and a booklet.