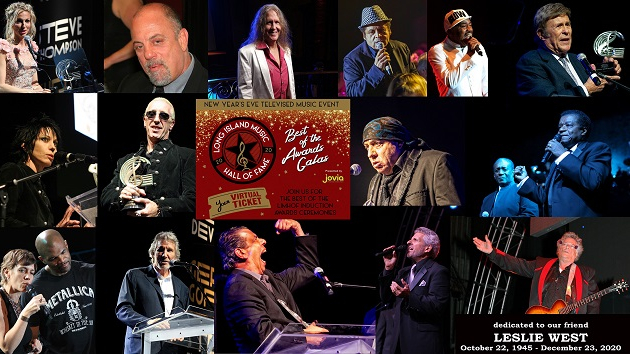 A star-studded New Year’s Eve presented by the Long Island Music Hall of Fame will air this evening at 9 p.m. ET on the local Long Island, New York, channel News 12 Plus.  It also will stream on the station’s official Facebook page.

The 90-minute program, dubbed Best of the Awards Galas, will feature highlights from past Long Island Music Hall of Fame induction ceremonies held from 2006 through 2018, including performances, speeches, behind-the-scenes moments and more.

The show also features a special tribute to Mountain frontman and Long Island native Leslie West, who passed away on December 23 at age 75 and was one of the first Long Island Music Hall of Fame inductees.

The Best of the Awards Galas special will be hosted by Zebra singer/guitarist Randy Jackson.

“I was very surprised and flattered to be asked to host the [show],” says Jackson. “The talent highlighted in this show far exceeds any other ‘regional’ Hall of Fame, in both diversity and world-wide appeal.”

Proceeds raised by the program will benefit the Long Island Music Hall of Fame’s educational and scholarship programs.