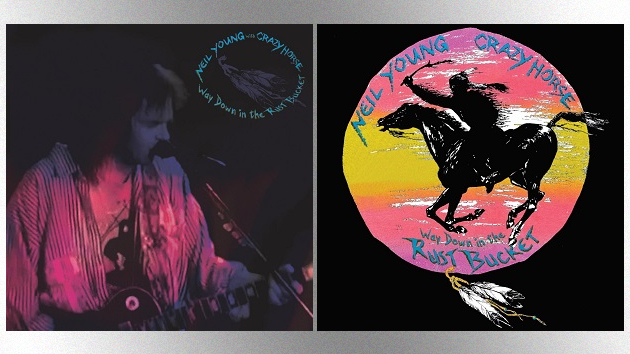 More than a year after first mentioning the project on his Neil Young Archives website, Neil Young has announced full official plans to release an archival concert album and video called Way Down in the Rust Bucket on February 26.

The previously unreleased album and film document a November 1990 show Young played with Crazy Horse at the Santa Cruz, California, club The Catalyst. The concert featured Neil and his famous backing group playing three sets, and included eight of the 10 tunes from their then-new album Ragged Glory, which was released two months earlier. The performance also included classics such as “Cinnamon Girl,” “Like a Hurricane” and “Cortez the Killer,” as well as several deep cuts.

Young played his 1975 song “Danger Bird” and his 1981 tune “Surfer Joe and Moe the Sleaze” live for the first time at the gig.

Way Down in the Rust Bucket will be available as a two-CD set, a four-LP package and a deluxe box set containing the CDs, the LPs and a DVD featuring footage of the full show, including a 13-minute version of “Cowgirl in the Sand” that doesn’t appear on the audio versions. The album also will be available in multiple digital formats.

Fans who pre-order Way Down in the Rust Bucket will receive an instant free download of a live, nine-minute version of the Ragged Glory tune “Country Home.” The song also is available for streaming now, including at Neil’s official YouTube channel, while a video of the performance has been posted at NeilYoungArchives.com.

Here’s the Way Down in the Rust Bucket track listing: