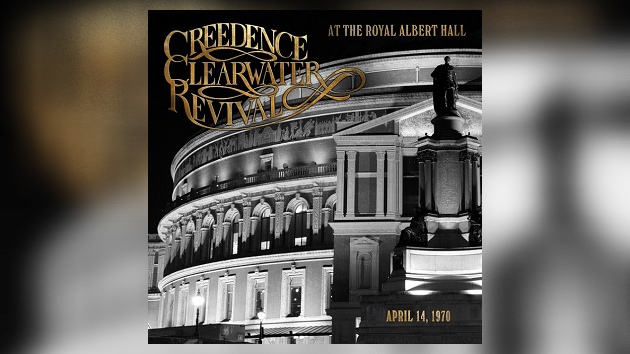 The film, which includes footage of CCR’s entire April 14, 1970, concert at the Royal Albert Hall and is narrated by Jeff Bridges, will premiere internationally on September 14. The album will be released in multiple formats that same day.

Titled Creedence Clearwater Revival at the Royal Albert Hall, the album features renditions of all 12 songs performed by CCR at the show, including such classic as “Travelin’ Band,” “Fortunate Son,” “Bad Moon Rising” and “Proud Mary.”

The version of “Bad Moon Rising” is available now as an advance digital track.

The album, which can be preordered now, will be available on CD, cassette, 180-gram vinyl and via various digital formats. Select retailers, including Walmart and Target, are offering limited-edition colored-vinyl variants of the record.

Meanwhile, a super deluxe box set will be released on November 14 that features a Blu-ray of the Travelin’ Band film, two-LP 45-rpm versions of the live album and a bonus CD containing music that’s featured in the movie.

The Blu-ray also includes high-res digital audio versions of the album. In addition, the package boasts a reproduction of CCR’s 1970 tour program, a poster and a 16-page booklet that includes an excerpt from Bridges’ voice-over script for the flick.

As previously reported, Travelin’ Band features a treasure trove of rare and unseen footage, including recently rediscovered 16-mm film of the concert and behind-the-scenes clips of the band.