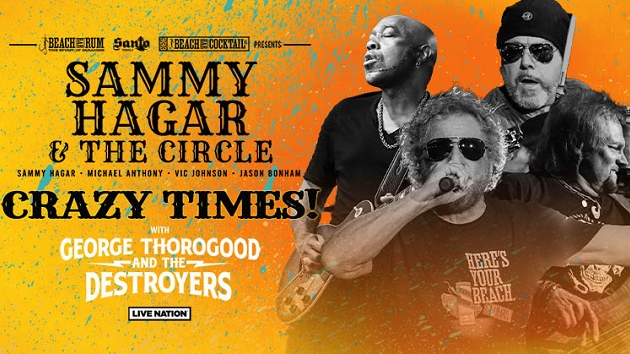 Sammy Hagar and his current group The Circle have unveiled plans for a 14-show U.S. trek dubbed the Crazy Times tour featuring special guests George Thorogood & The Destroyers that will take place on select dates in June, August and September.

The tour gets underway on June 10 in Bridgeport, Connecticut, and is plotted out through a September 10 show in Irvine, California.

“A tour this size has been a long time coming and it’s definitely going to be worth the wait,” the Red Rocker says in a statement. “The Circle and I are super excited and ready to throw the party of the year with George Thorogood. We’re going to take the music and party to a whole new level — ‘Crazy Times’ is an understatement.”

The Crazy Times trek will follow Hagar’s recently announced 2022 Las Vegas residency at The STRAT Theater. Those shows, which will feature Sammy performing with The Circle and some surprise guests, are scheduled for February 9, 11 and 12, and March 23, 25 and 26.

“I just bided my time:” Steve Nicks claims she delayed breakup with Lindsey Buckingham to save Fleetwood Mac

Neil Young on why he won’t do a ‘Harvest’ tour: “It’s not what I’m interested in”

‘The Police — Greatest Hits’ being reissued on vinyl for 30th anniversary