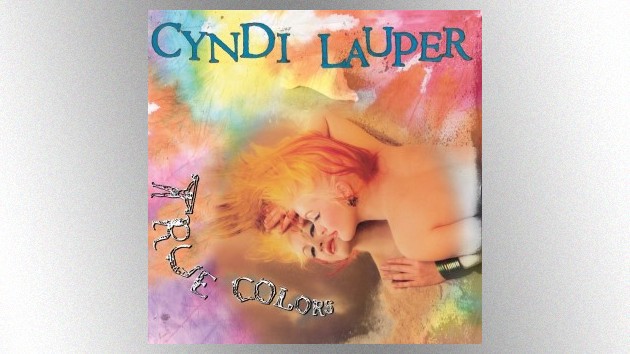 Cyndi Lauper‘s album True Colors — featuring the hit title track, plus “Change of Heart” and more — came out 35 years ago today, on October 14, 1986.  To celebrate, she’s releasing an expanded digital edition of the album tonight at midnight, Rolling Stone reports.

The expanded edition features two bonus songs: a remix of the number-one title track, and its B-side, “Heading for the Moon,” which has never been available on streaming services until now.  There’s also a “True Colors” Instagram filter.

In her Rolling Stone interview, Cyndi reveals that the song “True Colors” was written for Canadian country-pop singer Anne Murray, who turned it down.  Initially, Cyndi wasn’t sure it was right for her, but tells Rolling Stone, “When I heard our demo, I realized it had intimacy, and intimacy was the the most important thing.”

Explaining that she recorded it after a friend died of AIDS, Cyndi notes that “True Colors” was “for me, and his partner who was left behind, and his friends who loved him, to comfort us.”  Now, of course, it’s become an LGBTQ anthem.

Cyndi also reveals that some of her favorite contemporary artists are Olivia Rodrigo, Billie Eilish and Taylor Swift. “She’s always been a wonderful writer, but [that last COVID record] was poetry,” Cyndi says of Taylor.

“The only thing I don’t like about new music — when I listen to what the top new music is, there’s a lot of men, not a lot of women,” Cyndi points out. “But [there are] so many great musicians out there now. It’s a good time to be listening. I’m always listening, always learning.”

Toto to kick off Dogz of Oz world tour in February