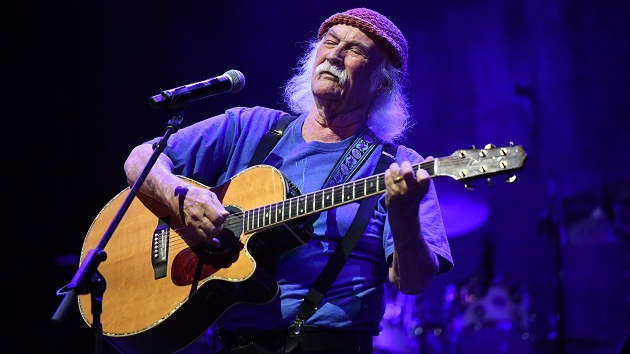 While he was in The Byrds, David Crosby wrote a song called “Triad” about a three-way relationship between a man and two women, which the folk-rock legend says was based on personal experience.

“Well, it was a different time,” Crosby tells the Los Angeles Times. “This was before the advent of AIDS, and after the invention of birth control, so…if you were adventuresome, there were adventures to be had. And I was adventuresome.”

Asked if any of these men were famous, Crosby responds, “I’m not going to pull off anybody’s covers for you.”

“The only one that I’m talking to is Stephen Stills. He and I are still friends,” Crosby reports. “I haven’t spoken to Neil [Young] or [Graham] Nash in a couple of years. Both of them have been most unkind to me, so I have no urge to.”

Elsewhere, Crosby says he recently had dinner with his old friend Joni Mitchell, who suffered a debilitating brain aneurysm in 2015, describing the get-together as “wonderful and distressing.”

“It was wonderful to reconnect and say hi, and I love her…She’s the best singer-songwriter of her time,” he notes. “It was distressing to see her in the state that she is in now. She has trouble walking. And she’s having to relearn how to do stuff, physically. I don’t think that she will ever regain the manual dexterity to be able to play guitar or piano.”

Crosby adds that Mitchell “is trying to recover her skills as a painter, and she’s as good a painter as she is a guitar player.”

It’s no RickRoll: “Never Gonna Give You Up” finally hits one billion YouTube views