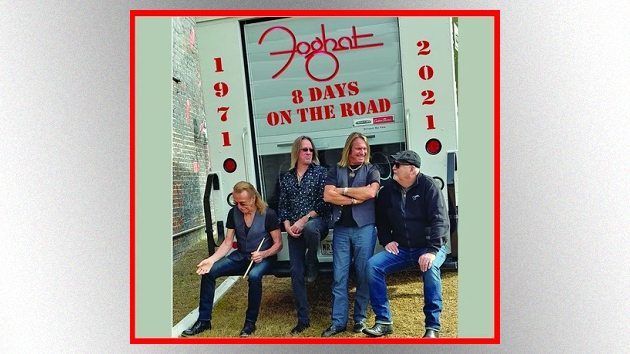 Veteran rockers Foghat will celebrate their 50th anniversary with a new concert album and video called 8 Days on the Road that will be released July 16 as a two-CD/DVD package and digitally.

The collection captures the band playing a 14-song set in November 2019 in Pawling, New York, at the Daryl’s House club, which is owned by Daryl Hall.

The show featured the band’s current lineup, which is led by founding drummer Roger Earl, delivering renditions of many of Foghat’s best-known tunes, including “Slow Ride,” “Fool for the City” and their classic Willie Dixon cover, “I Just Want to Make Love to You.”

The group also played versions of Al Green‘s “Take Me to the River,” Chuck Berry‘s “Maybellene” and Wild Cherry‘s “Play that Funky Music.” The latter tune’s inclusion in the show is notable because longtime Foghat lead guitarist Bryan Bassett is a former member of Wild Cherry who played on the original track.

Pre-order 8 Days on the Road now and you’ll receive an instant free download of a performance of the 1973 Foghat tune “Road Fever.” The track also has been released as an advance digital single, while a video from the DVD of the band playing the song has been posted on Foghat’s official YouTube channel.

“It was a change and a real pleasure to play this particular small room,” says Earl. “I explained to a couple of folks sitting down front as we were about to take the stage that we sweat a lot, and they might want to finish eating. They just grinned and said, ‘we’re ready.’ And so were we!”

A 180-gram-vinyl version of the album will be released at a later date.

Here’s the full 8 Days on the Road track list:

Get Vaxxed: Paul McCartney encourages fans to get the COVID-19 vaccine