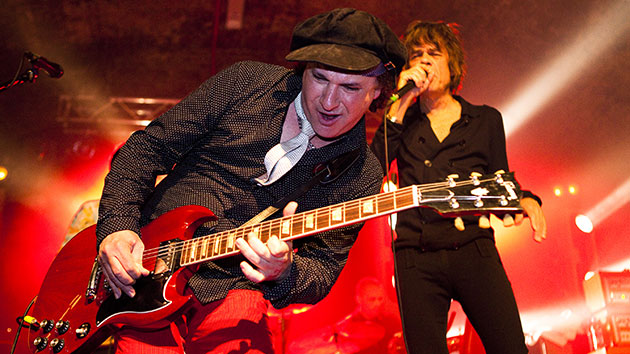 Sylvain Sylvain, founding rhythm guitarist of the influential glam-punk band New York Dolls, died Wednesday of cancer, according to a message on his official Facebook page. He was 69.

The note reads, “Sylvain battled cancer for the past two and 1/2 years. Though he fought it valiantly, [Wednesday] he passed away from this disease. While we grieve his loss, we know that he is finally at peace and out of pain. Please crank up his music, light a candle, say a prayer and let’s send this beautiful doll on his way.”

Johansen paid tribute to Sylvain in a Facebook message that reads, “My best friend for so many years, I can still remember the first time I saw him bop into the rehearsal space/bicycle shop with his carpetbag and guitar straight from the plane after having been deported from Amsterdam, I instantly loved him. I’m gonna miss you old pal. I’ll keep the home fires burning.”

Murcia died of drug-related causes in 1972 and was replaced by drummer Jerry Nolan, solidifying the band’s classic lineup. New York Dolls’ self-titled debut album was released in 1973 and while the record wasn’t commercially successful, it’s gone on to influence countless groups, thanks to songs like “Personality Crisis,” “Trash” and “Jet Boy.” In 2020, Rolling Stone ranked the album at #301 on its “500 Greatest Albums of All Time” list.

New York Dolls released one more studio album, 1974’s Too Much, Too Soon, before the lineup started to splinter. Johansen and Sylvain continued to lead the band until its 1976 breakup.

Sylvain then launched a solo career and also collaborated with various artists over the years. Thunders and Nolan died of drug-related causes in 1991 and 1992, respectively, but in 2004, surviving New York Dolls Sylvain, Johansen and Kane reunited to perform at the U.K.’s Meltdown Festival, organized by Morrissey.

Sadly, Kane died of leukemia one month after the concert, but Sylvain and Johansen continued on with a new Dolls lineup that went on to record three more studio albums and tour frequently through 2011, when the band broke up again.