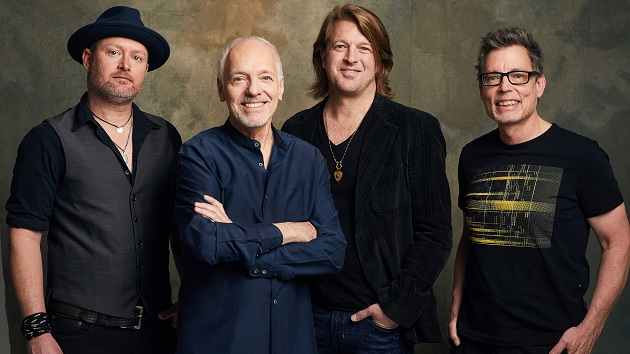 The tune is available for streaming now, and a companion music video also has debuted at Frampton’s YouTube channel. The clip features footage of Peter and the members of his current backing group — keyboardist Rob Arthur, guitarist Adam Lester, drummer Dan Wojciechowski and bassist Steve Mackey — performing their various parts for the song separately in the same studio.

“[I]t’s just [a] very well-shot and -lit performance video, as if we were recording it,” the veteran guitar whiz tells ABC Audio, adding that “it’s as good as” the video for his cover of Radiohead‘s “Reckoner” — which was the first advance track released from his upcoming album — “but…more simplistic.”

Peter says he’s a huge fan of Roxy Music’s Avalon album — noting that he “felt it was one of the best engineered, recorded [and] written [records]” — and he decided to pick one of the songs to cover for Frampton Forgets the Words, settling on the title track.

“[T]hat was the one on this record that I feel I got [closest] to [frontman Bryan Ferry‘s] phrasing and to his sort of thrown-away performance on that,” Peter explains. “I’m proud of the sound of the guitar on that one, and also the way I sort of mimicked his voice, and then threw in some Frampton-isms as well, of course.”

As previously reported, Frampton Forgets the Words will be released on April 23. The 10-track collection, which you can pre-order now, also features versions of songs by Sly and the Family Stone, George Harrison, Stevie Wonder, Lenny Kravitz, David Bowie and others.