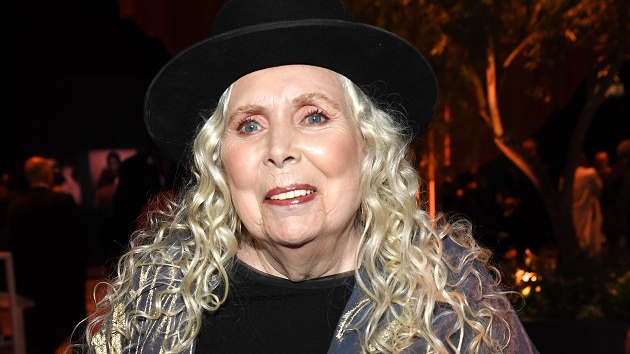 This week, a new interview Mitchell did with music journalist/filmmaker Cameron Crowe was published in U.K. newspaper The Guardian timed to promote the new collection, during which the 76-year-old legend discusses her health following the debilitating brain aneurysm she suffered in 2015.

Joni notes that, lately, she hasn’t been writing music, or playing guitar or piano, because she’s been “just concentrating on getting my health back.”

As she explains to Crowe, “[I’m] inching my way along. I’m showing slow improvement but moving forward.”

Referencing her childhood bout with polio, Mitchell points out that after the aneurysm, “I had to learn how [to walk] again. I couldn’t talk. Polio didn’t grab me like that, but the aneurysm took away a lot more, really. Took away my speech and my ability to walk.”

She adds, “I got my speech back quickly, but the walking I’m still struggling with. But I mean, I’m a fighter. I’ve got Irish blood! So…I knew, ‘Here I go again, another battle."”

As previously reported, the new box set feature demos, live performances and recordings from radio and TV appearances presented in chronological order, among them 29 original Mitchell songs never before released with her vocals.

The box set begins with the earliest-known recording of Mitchell, a 1963 radio-station performance in her hometown of Saskatoon, Saskatchewan, when she was just 19. The collection finishes with a full performance Joni gave at the Canterbury House venue in Ann Arbor, Michigan, in October 1967, complete with spoken-word introductions to many songs.

Visit JoniMitchell.com for full details about the box set.