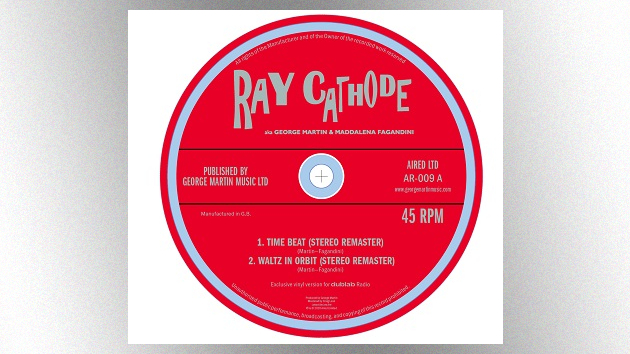 In April 1962, just a few weeks before George Martin began his long association with The Beatles, the famed producer released a pair of pioneering electronic instrumental tracks on which he collaborate with fellow audio experimenter Maddalena Fagandini of the BBC Radiophonic Workshop under the moniker Ray Cathode.

Now, a limited-edition 12-inch vinyl EP featuring remastered versions of the recordings — “Time Beat” and “Waltz in Orbit” — as well as new remixed interpretations of the tracks, will be released on May 1.

Only 100 numbered copies of the EPs are being made be available, sold exclusively by the Los Angeles-based nonprofit online community radio station dublab.

Even before his work with The Beatles, Martin had been fascinated with audio experimentation, including such studio techniques as varying tape speeds, reverse echo, backward recording and more.

In the early 1960s, Abbey Road Studios — where Martin worked — didn’t initially have much in the way of electronic equipment, but the nearby BBC Radiophonic Workshop did. Martin’s interest led him to explore the Workshop, where he met Fagandini and the duo decided to collaborate on the aforementioned tracks.

Martin would later note that his electronic experimentations, including the Ray Cathode tracks, greatly influenced some of the pioneering recordings he did with the Fab Four.

The remixes of “Time Beat” and “Waltz in Orbit” were created, respectively, by Drum & Lace and Sparkle Division. Drum & Lace, a.k.a. Sofia Hultquist, is an Italian electronic trip-hop composer, while Sparkle Division is an L.A.-based electronic duo made up of William Basinski and Preston Wendel.

You can check out the remastered versions of the original tracks now at George Martin Music Ltd.’s YouTube channel.