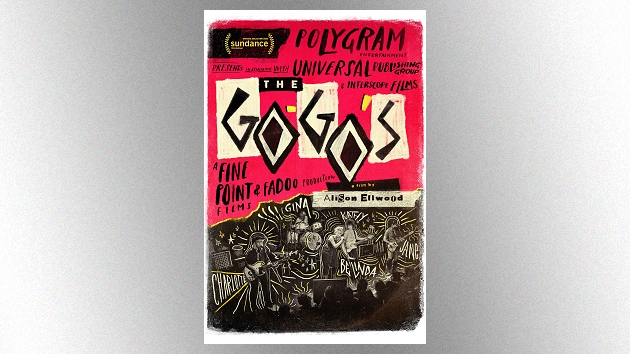 The story of The Go-Go’s was the focus of a new documentary, aptly titled The Go-Go’s, that got its TV premiere on Showtime this past July.  Now the film is slated to be released on DVD, on Blu-ray and digitally on February 5.

The film, which was directed by Alison Ellwood, charts the history of the all-female band, from its start as part of the Los Angeles punk scene and its fast rise to stardom in the early 1980s, to its 1985 breakup and subsequent multiple reunions. It features new interviews with all five Go-Go’s — Charlotte Caffey, Belinda Carlisle, Gina Schock, Kathy Valentine and Jane Wiedlin — as well as with Police drummer Stewart Copeland and others.

The Go-Go’s movie recently was honored at the 2020 Critics Choice Awards with the Best Music Documentary prize, and also won the Most Compelling Living Subjects in a Documentary award.

Coinciding with the news about the documentary’s DVD and Blu-ray release, Go-Go’s members Caffey, Valentine and Wiedlin will take part in a live chat with fans today at 6 p.m. ET. at the group’s official YouTube channel. The event also will feature the premiere of a music video for the band’s recently released single, “Club Zero,” at 6:15 p.m. ET. The documentary featured footage of the group working on the song and playing it at the famed L.A.-area club The Whisky a Go Go.

You can order The Go-Go’s DVD and Blu-ray now.