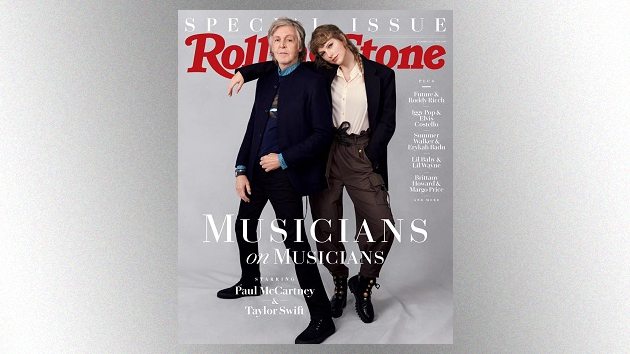 It’s not too often that the world’s most famous rock icon and one of the planet’s biggest pop stars interview each other, but that’s just what happened when Paul McCartney and Taylor Swift got together for the “Musicians on Musicians” cover story in the new issue of Rolling Stone.

In their wide-ranging chat, McCartney and Swift discuss songwriting, celebrity and the fact that they both recorded albums in lockdown: his McCartney III, coming out in December, and her recently released folklore.

Sir Paul explains how his album came together organically while he was spending lockdown in the U.K. with his daughter, Mary, her husband and their four kids. McCartney says made daily trips to his nearby studio and started putting tracks together with his engineer and his “equipment guy.”

Regarding his process for writing the new material, he notes, “Normally, I’d start with the instrument I wrote it on, either piano or guitar, and then probably add some drums and then a bit of bass till it started to sound like a record, and then just gradually layer it all up. It was fun.”

Also during the conversation, Swift reveals that one big lesson she learned from seeing McCartney in concert is that you’ve got to play the hits, even though you’ve “played them 300 million times.”

“The people who come to our shows have spent a lot of money,” Paul maintains. “We can afford to go to a couple of shows and it doesn’t make much difference. But a lot of ordinary working folks…it’s a big event in their life, and so I try and deliver.”

At one point, Swift brings up the fact that had COVID-19 not happened, both of them would have played the U.K.’s Glastonbury festival this year — and McCartney reveals that he would’ve asked Taylor to perform with him.

“I would’ve done ‘Shake It Off,"” he reveals, leading Swift to gush, “Oh, my God, that would have been amazing.”