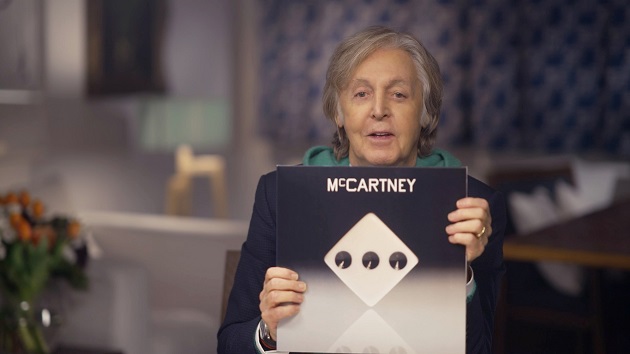 Just in time for the release of his new album, McCartney III, Paul McCartney has launched his own talkshoplive channel to promote and sell the record.

The talkshoplive platform is described as “the first-ever live streaming, social selling online network.” McCartney has posted an introductory video in which he shares some details about the record.

“It’s an album I made during lockdown, or ‘rockdown’ as we call it, and it was really fun to make,” McCartney explains in the video. “I was completing songs just for my own fun and, eventually, I had a lot of tracks finished. And I wrote some special ones, and then I finished ones that I had been meaning to finish. And anyway, all in all, I suddenly had 11 tracks, all finished, ready to go.”

He continues, “So I thought, ‘Well, I don’t know what I do with this. It’s an album, maybe, but how am I going to explain it?’ And then I realized, ’cause I’d played everything on the album, just like [1970’s] McCartney I and [1980’s] McCartney II…well, this is number three in the trilogy. It’s McCartney III.”

As previously reported, McCartney will be a guest tonight on The Tonight Show Starring Jimmy Fallon, which airs at 11:35 p.m. ET on NBC. He also will appear on a new episode of the YouTube series Released that will stream on his YouTube channel starting at 11:45 p.m. ET. The program will feature McCartney chatting with Chris Rock, and at the end, a music video for his new song “Find My Way” will premiere at midnight.

Collection of re-recorded versions of B.J. Thomas hits to be released on silver vinyl this Friday