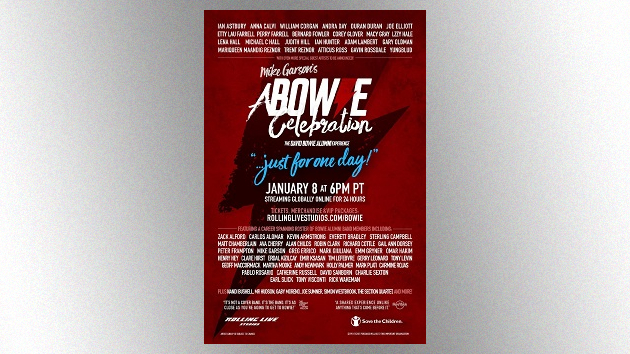 Peter Frampton, Duran Duran, Mott the Hoople‘s Ian Hunter and ex-Yes keyboardist Rick Wakeman are among the artists who have newly joined the lineup of a recently announced livestream event marking what would’ve been David Bowie‘s 74th birthday.

The online concert, dubbed A Bowie Celebration: Just for One Day!, will air January 8, 2021, which also is two days before the fifth anniversary of the rock legend’s passing.

Frampton, Hunter and Wakeman all collaborated with Bowie during their careers. Peter was friends with David during their teen years, and went on to record and tour with Bowie during the 1980s. Bowie wrote Mott the Hoople’s signature 1972 song “All the Young Dudes,” and produced the band’s album of the same name. Wakeman played on three of David’s classic early albums.

The concert’s house band will feature various musicians who toured and collaborated with Bowie throughout his career, including frequent producer Tony Visconti and members of the group with whom David recorded his final album, Blackstar.

Since 2018, Garson has organized a Bowie tribute tour featuring other Bowie touring alums and guest singers, but this year’s trek was put on hold because of the COVID-19 pandemic.

Tickets and ticket bundles are available at RollingLiveStudios.com/Bowie. Two dollars from each ticket sold will be donated to Save the Children, a charity that Bowie supported.

New David Bowie compilation ‘The Width of a Circle,’ featuring rare 1970 recordings, due out in May