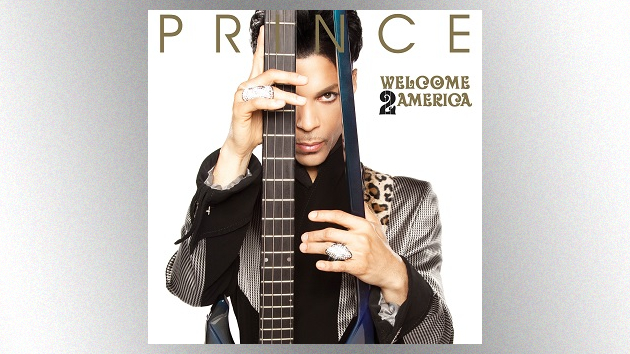 A previously unheard studio album that Prince recorded in 2010 called Welcome 2 America will get its release on July 30 in multiple formats and configurations.

The 12-track collection finds Prince musing on a variety of issues and themes that concerned him about the state of the U.S. at the time, and that now seem prescient.

In advance of Welcome 2 America’s arrival, the album’s title track has been released as a digital single and via streaming services.

The song features Prince offering up a spoken-word critique of modern-day America focusing on the superficiality of social media, reality TV and celebrity culture, the corporate-run music business and more.

Welcome 2 America, which you can pre-order now, will be available on CD, vinyl LP and digitally, as well as a deluxe version featuring the CD, the LP and a Blu-ray with a video of a full unreleased concert that Prince played with his New Power Generation backing band in April 2011 at The Forum in Inglewood, California.

The deluxe collection comes packaged with a 32-page companion book and a variety of memorabilia, including a photographic art print and a poster, as well as replicas of a setlist, a ticket and backstage passes.

This Sunday evening, a segment focusing on the story behind Welcome 2 America will air on CBS’ 60 Minutes.

Shout It Out Loud! KISS is releasing a deluxe 45th anniversary ‘Destroyer’ reissue in November