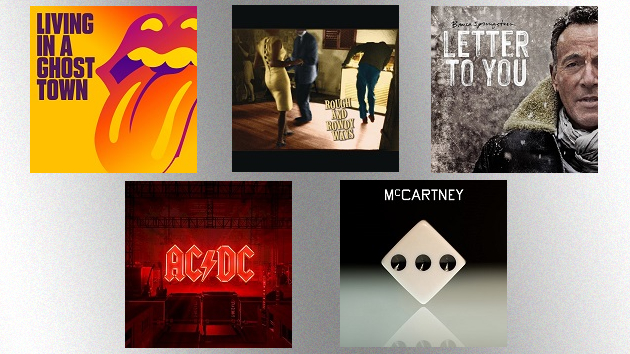 While the COVID-19 pandemic essentially put all touring on hold, plenty of veteran artists still released new music in 2020, some of which even was recorded after the lockdown began.  Here’s a look at some of the significant rock releases of 2020:

On February 7, shortly before the pandemic took hold, Green Day started off the year with a bang, thanks to Father of All…, a 26-minute punk ripper. A week later, Huey Lewis & the News released Weather, their first album of new original tunes since 2001. The tracks were recorded before Lewis’ suffered significant hearing loss because of Ménière’s disease.

On April 23, The Rolling Stones thrilled fans by putting out a new original lockdown-inspired song called “Living in a Ghost Town.” The British rock legends started working in 2019 and completed it remotely after the pandemic began.

On June 19, Bob Dylan released his first album of new original tunes in eight years, Rough and Rowdy Ways. The album was preceded by three advance singles, the first of which, the epic 17-minute-long “Murder Most Foul,” debuted at #1 on Billboard’s Rock Digital Song Sales chart, marking the first time in his almost-60-year career that Dylan has had a song top any Billboard chart.

Van Morrison caused quite a bit of controversy when began he announced in September that he was releasing three singles protesting the U.K. COVID lockdown because he felt the health restrictions were wrongly destroying live music in the country. The songs — “Born to Be Free,” “As I Walked Out” and “No More Lockdown” — were released on September 25, October 9 and October 23, respectively. A fourth Morrison-penned anti-lockdown tune, “Stand and Deliver,” which was sung by Eric Clapton, arrived on December 18.

Bon Jovi released their first new studio album in four years, the aptly titled 2020, on October 2. In advance of the album, the band released a pair of topical tracks recorded during the lockdown — “Do What You Can,” which inspired by the fight against COVID-19, and “American Reckoning,” a protest song in support of the Black Lives Matter movement.

On October 13, Stevie Wonder released his first new original tunes in more than a decade — a pair of tunes titled “Where Is Our Love Song” and “Can’t Put It in the Hands of Fate.” They’re the first releases on Wonder’s new label, So What the Fuss Music.

Bruce Springsteen‘s latest album, Letter to You, was issued on October 23. Bruce teamed up with his E Street Band to make the album, which was recorded over a period of five days in November 2019 at his New Jersey home studio.

One of the year’s most anticipated albums, AC/DC‘s Power Up, was released on November 13. The record, which featured all of the surviving members of the band’s classic Back in Black lineup, was dedicated to late guitarist Malcolm Young, who died in 2017. It debuted at #1 on the Billboard 200.

John Fogerty released a new album titled Fogerty’s Factory on November 20 that mainly featured live recordings he made in and around his home with his three youngest children: sons Tyler and Shane and daughter Kelsy. The album includes renditions of select Creedence Clearwater Revival tunes, solo songs and covers.

Closing out the year is a new album from Paul McCartney, McCartney III, which arrived on December 18. The ex-Beatles legend recorded at his studio in Sussex, U.K., while quarantining with his daughter Mary and her family. Sir Paul considers the project a sequel to his 1970 debut, McCartney, and his 1980 album, McCartney II, as all as he recorded all three albums almost entirely by himself.

Here’s a list of some other noteworthy rock releases of 2020:

Jackson Browne: Released new singles titled “A Little Too Soon to Say” and “Downhill from Everywhere” on March 27 and April 22, respectively.

Lynyrd Skynyrd: Released the new single “Last of the Street Survivors” on April 24.

The Beach Boys‘ Mike Love: Released the new solo single “This Too Shall Pass” on May 1.

Jimmy Buffett: Released a new studio album, Life on the Flip Side, on May 29, and also issued Songs You Don’t Know by Heart, a collection of new acoustic versions of some of his early deep cuts, on November 27.

The Pretenders: Released the new studio album, Hate for Sale, on July 17.

Kansas: Released the new studio album, The Absence of Presence, on July 17.

Carlos Santana: Played guitar on several songs featured on the new solo album by his wife, Santana drummer Cindy Blackman Santana, titled Give the Drummer Some, which also was released September 18.

Stevie Nicks: Released a new single, “Show Them the Way,” on October 9.

Heart’s Nancy Wilson: Released a new single, a cover of Springsteen’s “The Rising,” on October 23.

Shock Rock Me! Alice Cooper to launch US tour with Ace Frehley in September