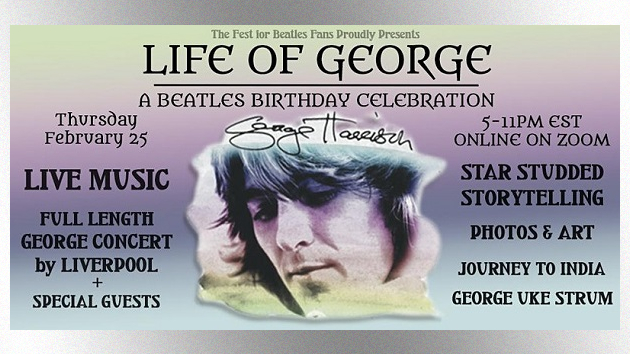 Courtesy of The Fest for Beatles Fans

Today marks what would have been George Harrison‘s 78th birthday, and to mark the occasion, The Fest for Beatles Fans is presenting a special virtual evening of music, storytelling and other tributes, featuring some of the late Beatles guitarist’s friends and fellow musicians.

Dubbed “Life of George: A Beatles Birthday Celebration,” the event will run from 5 p.m. through 11 p.m. ET and will be viewable via Zoom, with tickets available for $15 at Eventbrite.com.

Molland is expected to play some music, as well as chat about working with Harrison, who co-produced Badfinger’s 1971 album No Dice and tapped Joey to perform at the Concert for Bangla Desh.  Molland also contributed to Harrison’s classic 1970 debut solo album All Things Must Pass.

Juber, was part of Wings’ final lineup, will share his own recollections of Harrison, and play acoustic renditions of some of George’s songs.

Kramer, who emerged from the same Liverpool music scene as The Beatles, and was also managed by Brian Epstein, will sing a song from Harrison’s posthumous album, Brainwashed, in addition to talking about George.

Plus, there’ll be a full-length Harrison tribute concert by the band Liverpool, who will play live from the Daryl’s House venue in Pawling, New York.

A virtual fan-art exhibit, a ukulele sing-along, a Harrison trivia contest and more guests round out the program.

Meanwhile, The Fest for Beatles Fans’ Facebook page will host a free birthday tribute from 1 p.m. to 4:30 p.m. ET today.