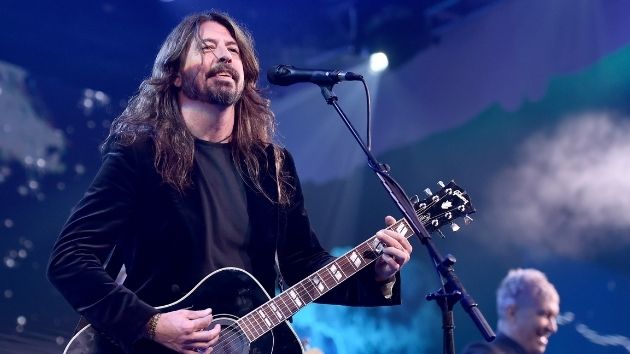 Dave Grohl drove up to Jimmy Kimmel Live! Tuesday night in style by rolling up in the same red van he drove the countryside with on his first Foo Fighters tour.

Unfortunately, Grohl parked the bright orange van in the fire lane, causing host Jimmy Kimmel to shake his head in disbelief before promising the audience to film the van getting towed.

While chatting about his upcoming What Drives Us documentary, Grohl remarked how much time he spent on the project.

“The last year that we spent at home not being on the road, I think I’ve probably been busier than I ever have in my entire life,” the rocker remarked.

Grohl also discussed chatting with rock legends such as Steven Tyler, The Edge, Ringo Starr and many others for his upcoming documentary.

On the topic of the Aerosmith frontman, said Grohl, “I interviewed him for about 2 hours 20 minutes. Those 10 minutes of stuff I could actually understand?  Solid gold.”

As for what inspired his upcoming doc, the “Learn to Fly” singer revealed, “One of the reasons why we made this film was because we were planning on doing a 25th anniversary tour where we would re-do our first tour all over again.”

While that didn’t come into fruition, Grohl teased that their “26th anniversary is going to kick so much ass.”

What Drives Us premieres Friday on Amazon Prime.

Grohl closed out the show with his 15-year-old daughter Violet to perform their joint cover X song “Nausea.”  However, the performance was made all the sweeter wiith Grohl turning it into a mini Nirvana reunion by teaming with bassist and former bandmate Krist Novoselic to provide backup.