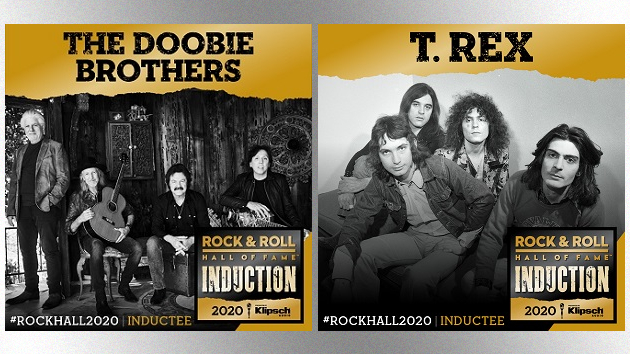 The Rock & Roll Hall of Fame officially inducted its Class of 2020 over the weekend during a pre-recorded HBO TV special that took the place of the usual live ceremony, which was canceled this year because of COVID-19.

The show began with an introduction from Dave Grohl, who commented that each of the inductees shared in common the “undying spirit of rock ‘n’ roll.”

The Doobie Brothers got inducted first, with country star and American Idol judge Luke Bryan welcoming the veteran classic rockers in the Hall.

“Wow! It’s been a long time coming, but we are so grateful and excited to be inducted,” Simmons said. “A lot of our musical influences are enshrined in the Hall, so we couldn’t ask for better company.”

Iggy Pop inducted Nine Inch Nails, commenting that, “Listening to Nine Inch Nails feels like hearing the truth, so it gets you a little bit closer to God,” a reference to the band’s iconic single, “Closer.”

In accepting the induction, frontman Trent Reznor thanked the other six NIN members who received the Rock Hall honor alongside him, as well as several past members, including Filter‘s Richard Patrick. He also thanked his family and the “intense” Nine Inch Nails fans that can “drive me out of my mind” but are nevertheless “the best.”

“Even now, music’s always been the thing that keeps me going,” Reznor said. “As an artist, I think the most significant accomplishment or feeling is realizing something you’ve created from a fragile and intimate place has reached out, resonated and affected someone else, possibly changing how they see the world.”

Actress Charlize Theron inducted Depeche Mode, and commented on how the trio provided the “soundtrack to my life.” Frontman Dave Gahan thanked his band mates past and present, and spoke on how finding music changed his life and kept him, as keyboardist Andy Fletcher quipped, from “still stealing cars.”

Ringo Starr, who was good friends with late T. Rex frontman Marc Bolan, inducted the glam-rock greats. Starr, said of Bolan, who died in a 1979 car crash, “We lost him way too young, but in his short life he made 12 albums that were as far out and ahead of their time as he was.”

Marc’s son, Rolan Bolan, accepted T. Rex’s induction on behalf of his father and the rest of the band.

Irving Azoff and Jon Landau, the longtime managers, respectively, of The Eagles and Bruce Springsteen, were inducted into the Rock Hall as non-performers.

Nikki Sixx announces ‘The First 21’ book, due out in October