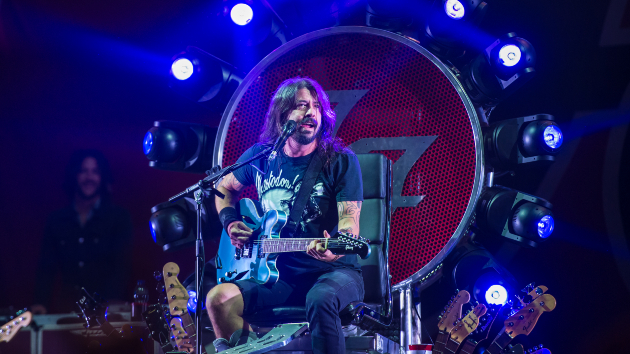 Darin Wall, the bassist for the Seattle-based metal band Greyhawk, sat in the giant, guitar-adorned structure during a recent concert as he continues to recover from being shot in the leg.

According to the Idaho Statesman, Wall had suffered the injury while trying to protect others from a man who allegedly brandished a gun outside a Boise venue where Greyhawk was playing earlier this month. Upon seeing the weapon, Wall “started kicking and pushing [the suspect] to get him away from the patio where people had gathered.” In the commotion, the suspect shot Wall’s leg.

The Boise Police Department reports that the suspect, 26-year-old Ethan Byrd, was arrested and charged with aggravated battery.

Grohl — who, of course, has ties to Seattle — apparently heard of Wall’s bravery, and sent him his throne to use.

“It was beyond a thrill to sit in Dave Grohl from @foofighters throne last night,” Wall wrote in an Instagram post.

“This whole ordeal has been intense, surreal and humbling,” he added. “Of course I wish it never happened, and that this bullet was not in my leg, but the love and support the rock and metal community has shown is staggering. Words can’t describe how moving this night was.”