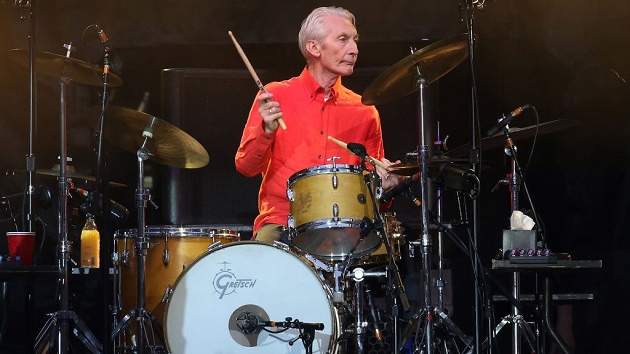 A new official biography about late Rolling Stones drummer Charlie Watts, authorized by the band and Watts’ family, is scheduled to be published on October 11.

Charlie’s Good Tonight: The Life, the Times and the Rolling Stones includes forewords written by Stones co-founders Mick Jagger and Keith Richards, as well as an introductory section penned by the band’s early manager and producer, Andrew Loog Oldham.

The book was written by Paul Sexton, a veteran British writer and broadcaster who has covered The Rolling Stones for more than 30 years. Charlie’s Good Tonight features interviews with Jagger, Richards and longtime Stones guitarist Ronnie Wood, as well as with various friends, family members and musical collaborators.

The book will offer an intimate look at famously private Watts, who died of cancer at age 80 last August.

“Our dear friend Charlie Watts was not just a fantastic drummer but a wonderful person,” The Rolling Stones say in a statement shared by RollingStone.com. “He was funny and generous and a man of great taste and we miss him terribly. It’s great that his family have authorized this official biography by Paul Sexton, who’s been writing and broadcasting about Charlie and the band for many years.”

Adds Sexton, “One of Charlie’s good friends said to me that he was a very easy man to love. Having had the pleasure of his company on so many occasions over the course of more than a quarter of a century, that’s a sentiment I echo wholeheartedly. To be able, with the help and encouragement of those who knew him best, to draw on my time with this unique man and his fellow Rolling Stones to write his authorized biography, is a thrill and an honor.”

Charlie’s Good Tonight can be preordered now at HarperCollins.com.