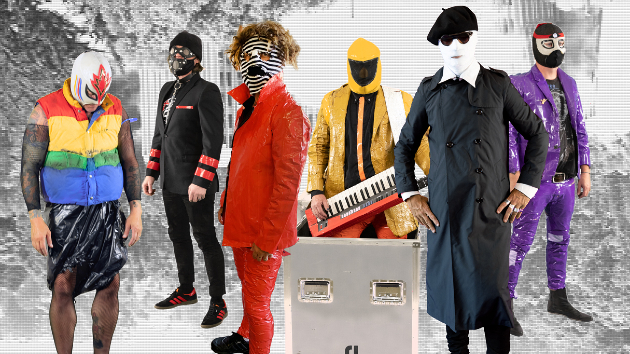 Credit: The Church Of Lushotology

The Network, a band that is definitely not Green Day, will be performing this week on The Tonight Show Starring Jimmy Fallon.

The group, which certainly does not consist of the “Basket Case” rockers wearing masks and playing new wave music, is set to take the stage on the NBC talk show Friday, February 26.

You might be forgiven for thinking that The Network is indeed Green Day in disguise, being that their lead singer sounds exactly like Billie Joe Armstrong, or that bassist Mike Dirnt said in a 2013 interview that The Network was, in fact, Green Day. Despite all that very clear evidence, The Network has continued to deny any connection to the punk trio.

“We had often been mistaken as the planet’s greatest rock n’ roll band, Green Day,” The Network says. “This earthly comparison is almost as comical as the humans that inhabit this dying planet!”

Even the NBC website seems confused, referring to The Network as “rumored to be a secret project of the well-known band Green Day.”

The Network released a new album called Money Money 2020 Pt II: We Told Ya So! last December. It’s their first record in 17 years.

Green Day, meanwhile, just dropped a new song called “Here Comes the Shock” to follow their 2020 album, Father of All…

Elton John rallies against HIV and homophobic misinformation: “We need to break down the myths”

Stone Temple Pilots reflect ahead of ‘Tiny Music’ reissue: “It’s heartbreaking that [Scott]’s not here to celebrate this”