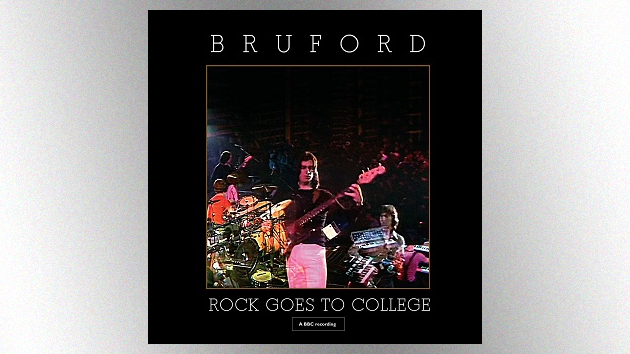 Legendary prog-rock drummer Bill Bruford‘s 1979 appearance on the U.K. television show Rock Goes to College has been reissued as a DVD/CD set.

The video and album capture the founding Yes and ex-King Crimson drummer performing with his solo band, Bruford, which also featured guitarist Allan Holdsworth, bassist Jeff Berlin, guest singer Annette Peacock and keyboardist Dave Stewart — not to be confused with the Eurythmics member of the same name.

Bruford’s appearance on the BBC show, which is featured on the DVD, is the only officially released performance footage of the band. The group’s set included songs from its first two studio albums — 1978’s Feels Good to Me and 1979’s One of a Kind.

“This was a baptism by fire, our first gig in the first few days of the band’s existence,” Bill says of the Rock Goes to College appearance. “At the beginning of it I wasn’t sure. By the end, I knew we were on to something serious.”

Besides his work with his solo band, Yes and King Crimson, Bruford’s career credits include being a founding member of the prog supergroup U.K., and touring with Genesis in 1976. He was inducted into the Rock & Roll Hall of Fame with Yes in 2017.

King of Page: The Police’s Andy Summers to publish his first book of short stories in August