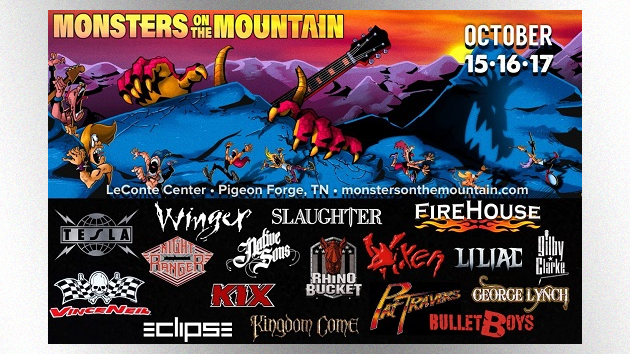 Courtesy of Monsters on the Mountain

From the same people who bring you the Monsters of Rock Cruise comes the Monsters on the Mountain festival, a three-day hard-rock extravaganza that will take place this October 15-17 at the at the LeConte Center in Pigeon Forge, Tennessee.

In addition to the performances, Monsters on the Mountain will offer a variety of interactive events and activities, including a rock ‘n’ roll merchandise vendor market, a rock-themed art gallery, and a tailgate party.

Tickets for the festival are available now, with three-day packages starting at $265 per person, not including fees and taxes. For more information, visit MonstersontheMountain.com.

As previously reported, after the 2021 edition of the Monsters of Rock Cruise was canceled because of the COVID-19 pandemic, the nautical extravaganza will return next year. The seagoing festival, which will be headlined by Alice Cooper, is scheduled to run from February 9 to February 14. Quite a few of the artists on the Monsters on the Mountain bill also will be performing on the cruise.