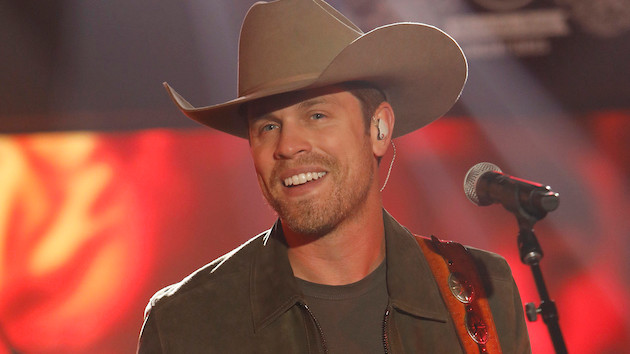 After a string of standalone song releases throughout 2021, Dustin Lynch is finally ready to share some details about his next album.

The singer announced that project, Blue in the Sky, in a conversation with Good Morning America’s Michael Strahan on Wednesday. During his stop at the show, Dustin also performed “Thinking ‘Bout You,” his six-week-long chart-topping duet with MacKenzie Porter.

“Thinking ‘Bout You” appears on the new album, along with 11 more songs, many of which are already familiar. Two other previously-released duets are on the track list: “Huntin’ Land” with Riley Green and “Tequila on a Boat” with Chris Lane.

Listeners may also recognize the titles “Pasadena” and “Not Every Cowboy,” which Dustin dropped as a two-pack last July.

During his GMA interview, the singer also hinted at some big concert news coming soon. “We’re gonna be announcing a big tour behind [the album] as well pretty soon,” he noted.

Blue in the Sky drops February 11. It’s available for pre-order now, and you can also check out the cover art — a sun-kissed portrait of the singer set against a sky-blue backdrop — on his socials.

Mickey Guyton’s patriotic Super Bowl look was a call-back to her debut album, ‘Remember Her Name’

Bottoms up: Thomas Rhett adds a second tequila to his Dos Primos brand