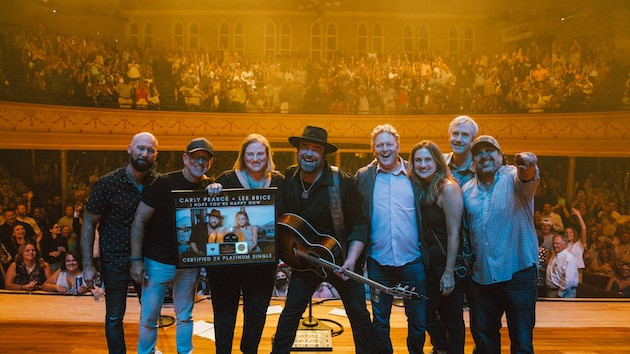 On Tuesday night, the song officially received RIAA 2X Platinum certification, and Carly and Lee each got a special plaque commemorating the occasion. It was a memorable night for both artists, as both were handed their surprise plaques in the middle of nights that were already shaping up to be pretty memorable.

Lee was presented with the plaque at the end of a performance at Nashville’s legendary Ryman Auditorium. He was there to play a benefit show for the John Hiatt Adolescent and Young Adult Treatment Fund at Cumberland Heights.

Meanwhile, Carly was also standing on one of her very favorite hometown stages: the Grand Ole Opry. She was there to be officially inducted as a member into the hallowed hall, fulfilling one of her lifelong dreams.

During the show that night, Carly performed “I Hope You’re Happy Now” solo, along with a number of other songs. She also duetted with Trisha Yearwood — who inducted her — on the latter star’s “How Do I Live.”  Jeannie Seely then joined the two women for a multi-generational rendition of Kitty Wells’ “Making Believe.”

“I Hope You’re Happy Now” also won Carly and Lee trophies for Musical Event of the Year at both the CMA and ACM Awards, and it’s the ACM’s 2020 Single of the Year, too.

Garth, The Ryman & You: Garth Brooks to play two shows at Ryman Auditorium

From Chicago to ‘Pelago,’ Ryan Hurd’s debut album title fits “To a T”

“If I Were a Cowboy”: Miranda Lambert teases new music ahead